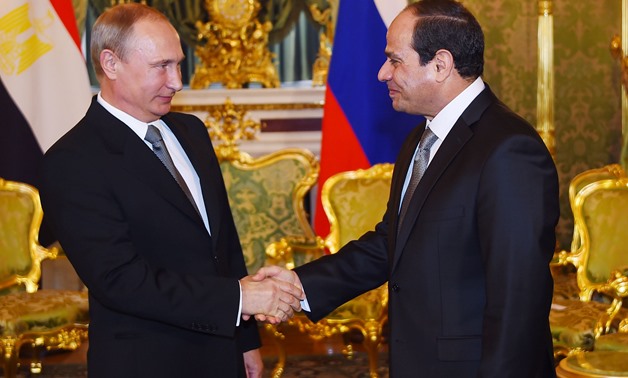 President Abdel Fattah Al-Sisi is currently in Moscow on a three-day visit for talks with his Russian counterpart Vladimir Putin, and is holding talks with Russian Prime Minister Dmitry Medvedev, and other senior officials on boosting economic cooperation.

Economic experts and diplomats says relations with Russia are very diversified with a very positive outlook, due to the current political rapprochement, noting that joint investments await expected refreshment following the Russian Industrial Zone (RIZ ) project establishment, while the resumption of Russian flights to Sharm El-Shiekh and Hurghada will also positively reflect on the Egyptian tourism sector.

Daily News Egypt exclusively received a document upon request from the General Authority For Investment and free zones (GAFI), explaining that total numbers of the Russian companies in Egypt are 451 companies, with investments worth $71.23m, offering 4,395 job opportunities.

The document noted that Egypt’s services sector is the most attractive sector for Russian investments in Egypt with 166 companies, adding that the tourism sector is ranked number 2 with 102 companies, while the market attracts 84 Russian construction companies, 18 agricultural companies, and only four companies in the Egyptian financial sector.

The document noted that top five governorates for the Russian companies in Egypt are the Red Sea with 256 companies, Cairo with 111 companies, Giza with 44 companies, Alexandria with 13 companies and Sharqeya with 7 companies.

Youmn El-Hamakki, an economic expert, said that Egypt’s investment relations with Russia need to be enhanced, noting that Russian investments in Egypt don’t suit with the extensive size of both countries.

El-Hamakki added that establishment of the RIZ project will refresh Russian investments in the local market, mentioning that “Egypt needs more investments in its heavy industrial sector, as well as its chemicals and medical fields.”

In May, Egypt’s Trade and Industry Ministry announced the signing of an agreement worth $7bn for the establishment of the RIZ project in the East Port Said region.

During the signing ceremony, former Minister of Trade and Industry Tarek Kabil explained that this 50-year agreement will give Russian companies rights to develop a 5.25m sqm stretches of land in the Suez Canal Economic Zone into an industrial zone for Russian companies that will be built over three phases, giving them a solid, strategically-located base in Egypt, to export to the rest of the Middle East and Africa.

Denis Manturov, Acting Minister of Trade and Industry of the Russian Federation also said during the signing that “the signing of this agreement comes as a culmination of intensive discussions between the two ministries of industry and trade in the two countries over the past two years.”

On Monday, Russian Foreign Minister Sergey Lavrov said that Russia started working on establishing an industrial zone in Egypt, adding, “Russia has also begun the construction of a nuclear power plant in the city of Dabaa.”

Additionally, former assistant of Egypt’s foreign minister, Rakha Ahmed, said that establishment of the RIZ will positively affect the bilateral trade exchange that recorded about $6.5bn in 2017, but with an imbalance favouring the Russian side.

“The RIZ project will increase Egypt’s trade so the trade exchange will be a little bit balanced,” he explained.

In August 2018, Head of Trade Representation of Russia in Egypt, Nikolai Aslanov said that Egypt’s trade exchange with Russia increased by 37% during the first half of 2018, in comparison with same period of 2017, recording $3.212bn, citing the statistics of the Russian Federal Customs Service.

Aslanov added that Russian exports reached $2,810bn, increasing by 42% from January to June, while exports from Egypt increased by 12% to reach $402m in the same period, noting that main items of Russian exports to Egypt are wheat, metals, gas, means of transportation, wood and woodworks, fats, and oils.

Statistics mentioned that wheat represented 30% of the total volume of exports with an increase of 25% during the first six months, up to $840m, in addition to metals and metal ware, which contributes 23% towards exports, hence increasing by 226% up to $655m.

Statistics also mentioned that oil and gas exports, which represent 17% of the total exports, increased over 84% up to $481m during the first six months, adding that means of transportation exports reached $196m, while wood and woodworks’ exports increased by 57% up to $169m, and fats and oils exports’ recorded $150m.

Ahmed added that Russian and Egypt agreed on manufacturing train carriages, which is also considered another important project.

Arafat added that an agreement between Egypt and a Russian-Hungarian consortium to produce 1,300 train vehicles at a cost of $1bn has been finalised, noting that the Russian company participating in the consortium is one of the biggest train manufacturers in the world.

The Russian-Hungarian consortium has been hired to help Egypt establish a local manufacturing line at the National Organization for Military Production, according to Arafat.

The first batch of the carriages will be manufactured in Russia, and will be a model for the other batches later.

Dabaa project is a top priority for Egypt

Egyptian foreign minister’s former assistant, Rakha Ahmed, also said that the Dabaa project will keep Egypt and Russia connected for over 20 years in the future, affirming that the project is top priority for the country, and is set to be discussed over the current presidential visit to Russia.

In December 2017, President Al-Sisi and his Russian counterpart witnessed the signing of a document to start the implementation of contracts for the construction of four nuclear reactors in the Dabaa area.

For the first reactor, primary receiving and commercial operation is expected to be completed by 2026. The agreed programme includes design and construction, supply of nuclear fuel, advisory services, maintenance, management, and treatment of exhausted fuel.

The project consists of four nuclear reactors with a capacity of 1,200 MW, with a total of 4,800 MW. The Russian Ministry of Finance provided a financing loan to establish the project worth $25bn, representing 85% of its value. President Al-Sisi approved the loan agreement, and it was announced in the Official Gazette in mid-May 2016.

The Russian side will operate the project after finishing its construction processes, said Ahmed, noting that continuing cooperation in the Dabaa project is a positive sign on developing the bilateral relations with Russia, following their relation’s deceleration due to the Russian plane crash in Sinai at end of October 2015.

The Minister of Electricity and Renewable Energy, Mohamed Shaker, and head of the Nuclear Power Plant Authority, Amjad al-Wakeel, will hold a meeting with officials of the Russian company Rosatom on the sidelines of President Abdel Fattah Al-Sisi’s visit to Moscow.

Shaker told Daily News Egypt on Tuesday that the operation of the Dabaa nuclear station is proceeding normally, and the project needs time to be implemented, and denied the reported cancellation of the contract. “Such rumours are absolutely untrue. We agreed on a timetable, and identified the cost and completed the work on the project,” he stressed.

The meeting will include the follow-up of the current position of the Dabaa Nuclear Plant Project, which is being implemented, and reviewing the characteristics of the project, the specifications of the selection of companies participating in the operational work of the station, as well as setting the timetable for the implementation of the project.

Since 30 June 2013, the joint political relations with Russia are developing very well on many aspects of cooperation, particularly the military and political fields, said Ahmed, adding that views of both countries regarding regional issues in Yemen, Syria, and Libya are compatible.

Russia and Egypt believe that the regional issues should be solved with negotiations and peaceful ways and not by force, Ahmed mentioned, noting that both countries are cooperating in information exchange regarding terrorist attacks, as Russia thinks that the now banned Muslim Brotherhood is a “terrorist entity.”

Ahmed said that there have been some reports saying that Russian nationals have “left their country and joined the Islamic State,” and added that “Russia seeks information about their activity due to possible attacks by them.”

Russia believes in the Palestinians’ right to establish their own state, in the Eastern Jerusalem beside the Israel’s state, which agrees with the Egyptian opinion, said Ahmed.

In another context, 2018 marks the 75th anniversary of the establishment of diplomatic relations between Russia and Egypt, according to Russian Foreign Minister Sergey Lavrov on Monday, adding, “the current political dialogue between the countries is developing dynamically, and the trade turnover is worth more than $6.5bn and is growing, and the treaty and its legal framework are being improved.”

The resumption of Russian flights to Sharm El-Sheikh and Hurgada will positively affect the relations, boost Egyptian tourism which suffered following the Russian decision of the flight-ban that was issued in October after the plane crash in Sinai in 2015.

“Russian planes fly only to Cairo airport now. I expect that the current visit by president Al-Sisi to Russia will witness announcement of resuming flights to Sharm El-Sheikh and Hurgada,” said Ahmed, adding that Egypt was receiving huge numbers of Russian tourists before 2015, which played an important role in boosting the country’s tourism, as well as its economy.

Russia’s biggest airline Aeroflot announced in March 2018 that it will resume its flights to Cairo in April 11 of the same year, recouping civilian air traffic after over two-and-half years.

Restoration of flights between Moscow and Cairo did not help Egypt’s troubled tourism sector, centred in resort towns on the Red Sea coast, where Russian tourists once flocked.

“Tourists do not need direct flights to Cairo. The transfer from Cairo to sea resorts is long and uncomfortable, and no one will be going there in that way,” Russian Tourism Industry spokesperson Irina Tyurina told international media in April.

Tyurina said that most Russians who want to visit the Red Sea areas will continue to book flights through Minsk or Istanbul, as they have since direct flights were suspended.