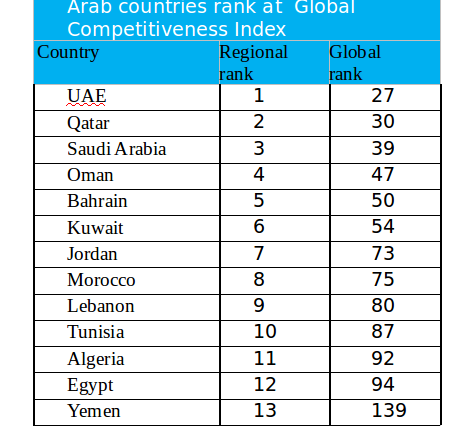 Egypt was ranked 94th out of 140 countries in the 2018 Global Competitiveness Index (GCI) with a slight increase of 0.4 points up in comparison with the previous years.

The index said that Egypt ranked second to last in the Arab world, despite Egypt’s positive performance in terms of market size. It was ranked among the world’s top 30 markets (24th worldwide) but was among the top five worst economies in terms of trade and customs tariffs, ranking 137. Regarding macroeconomic stability, Egypt was the 135th [fifth before the last].

Covering 140 economies, the GCI measures national competitiveness—defined as the set of institutions, policies and factors that determine the level of productivity issued by the World Economic Forum.

Regarding human capital and markets, Egypt ranked 99th in health, 130th in the labour market, and 121st in the product market. Also, it ranked 24th in market size, 99th in the financial system, 97th in business dynamics, and 64th in innovation ecosystem.

In terms of an enabling environment, the country was 102nd in institutions component, 56th in infrastructure, and 100th in the information and communication technology adoption.

The Egyptian Centre for Economic Studies is the local strategic partner to the forum in the Middle East and North Africa.

The report said that economic reforms have accelerated in recent years, after a combination of economic, social, and political factors increased the urgency to diversify the economy, and broaden the benefits of growth.

The UAE ranked 27th globally with a score of 73.4 points to become the first in the Arab world in terms of competitiveness. The UAE economy’s main strength lies in the quality of its enabling environment, as companies can operate under stable macroeconomic conditions (1st), make use of good infrastructure (15th), and has one of the highest levels of ICT adoption in the world (6th).

Qatar came in the second place after the UAE on the level of Arab world, ranking 30th globally. Saudi Arabia ranked 39th overall with a score of 67.5 points, thanks to a conducive macroeconomic environment (1st) that has weathered well the turmoil of the recent years, which have been characterised by low oil prices. With a score of 76.6 points, Israel ranked 20th globally.

The participation of women in the workforce remains low throughout most of the region, despite improvements made in education and youth unemployment, particularly in North Africa, with both Egypt and Tunisia scoring a 30% increase.