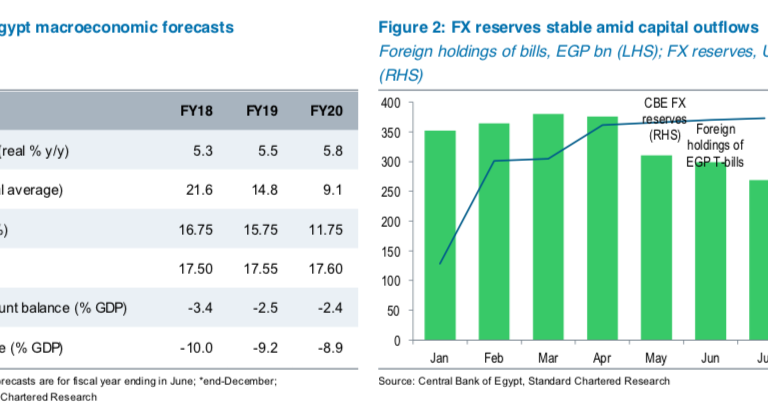 Standard Chartered Bank projected that the Egyptian economy growth will accelerate but the policy backdrop will remain challenging.

“We forecast a gross domestic product (GDP) growth of 5.5% in the fiscal year (FY) 2019 (which ends in June), picking up from an estimated 5.3% in FY 2018, based on actual government data through the first half (H1) of the FY. Public investment is boosting growth, along with the competitiveness boost to exports and tourism from the Egyptian pound’s weakness,” the bank stated.

According to the bank, this is helping to offset a slowing contribution from private consumption, the economy’s main engine. Rising gas output is another medium-term positive.

“Nevertheless, we expect interest rates to stay on hold in 2018 amid weak financial-market sentiment towards emerging economies; foreign holdings of Egyptian treasury securities declined by about 30% between March and July 2018. Although the EGP has remained stable so far, capital outflows will be a key monetary policy consideration, in our view,” the report read.

Standard Chartered Bank sees a risk that monetary easing could be delayed beyond the fourth quarter (Q4) of FY 2019. And while the CBE’s current foreign exchange (FX) reserves provide sufficient firepower, a reversal of earlier easing cannot be ruled out, should capital outflows intensify.

In addition, it added that fiscal consolidation is progressing, but targets are ambitious. “We expect the fiscal deficit to narrow to 9.2% of GDP in FY 2019, slightly above the government’s 8.4% target. We think the 2% primary fiscal surplus targeted under the IMF’s Extended Fund Facility (EFF) will be difficult to achieve, given that it would require subsidy cuts of 1.3% of GDP. Higher-than-expected global oil prices pose risks to our, and the government’s, fiscal deficit forecasts,” it explained.

While the government has entered oil-price hedging agreements to safeguard the budget, according to local media reports, Standard Chartered Bank thinks it is too early to assess the net impact on budget targets.

The IMF programme is on track, but rising external debt remains a concern. The third review of the EFF in June suggested that most performance targets had been met. A narrower current account deficit and external borrowings have helped to maintain FX reserves, which stood at $44.4bn at end-August.

“However, we are concerned about external debt, which totalled $88bn in March 2018 about 37% of GDP. Half of this is government debt, which likely increased further following a recent international issuance and the $2bn release of the IMF tranche in June.”