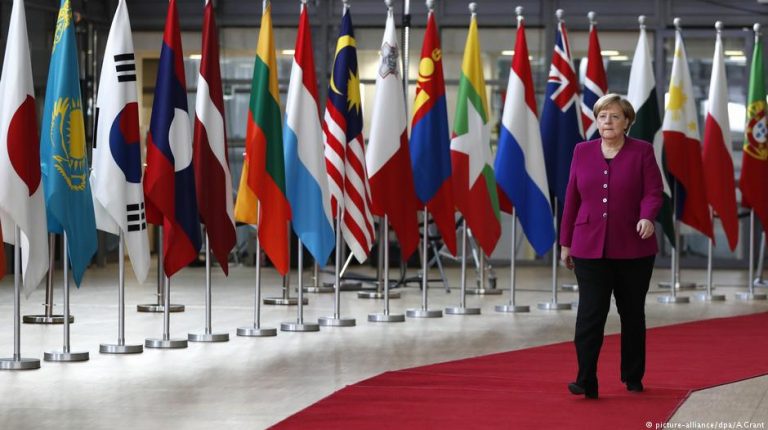 German Chancellor Angela Merkel has rebuked the “America First” approach to free trade of US President Donald Trump. Meeting in Brussels, EU and Asia leaders have pledged to create “win-win” situations.German Chancellor Angela Merkel defended free trade at a summit of European and Asian leaders in Brussels on Friday, rejecting the protectionist rhetoric and policy of US President Donald Trump.

"We can show that it's about creating win-win situations, making it clear that when one profits, the other also profits," she said at the 12th summit of the Asia-Europe Meeting (ASEM).

Merkel's call set the tone of the two-day meet, where 30 European leaders and their counterparts from 21 Asian countries are expected to defend the World Trade Organization (WTO), international cooperation, and the fight against climate change.

"The summit shows that countries from Europe and Asia, which all want a rule-based world trade, are gathering here to commit themselves to multilateralism and this is an important signal," Merkel said.

Under the banner of "America First," the US president has called for ripping up free trade deals, protected domestic industries through tariffs, and lambasted Germany and the European Union for their high export surpluses with the US.

Fighting back against that doctrine, the EU and Singapore are set to sign a free trade deal later on Friday.

Divisions below the surface

Disagreements nevertheless emerged between Europe and China appeared on Friday, with China refusing to admit wording in a final communique that would have called for the end of state subsidies, according to Reuters news agency.

The European Union and the United States have criticized China for distorting international trade by subsidizing national companies and promoting oversupply in international steel and aluminum markets.

Merkel acknowledged those difficulties in her speech on Friday, admitting that European leaders would "have to bring up questions of human rights and values in bilateral talks."