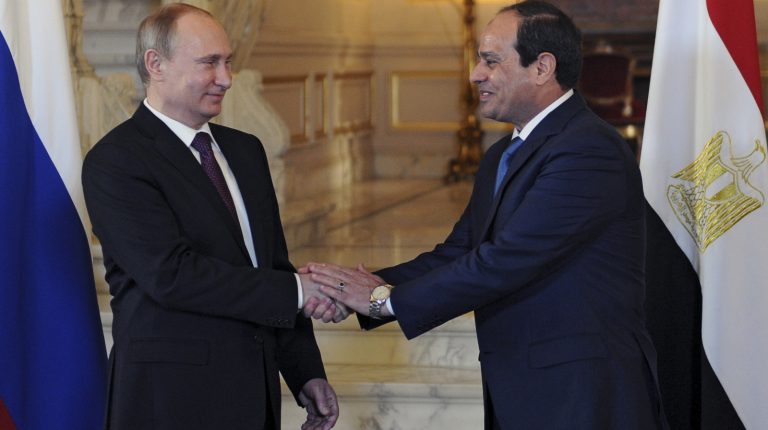 Egypt has received over 120 Russian business delegations in order to implement joint projects in the areas of oil and gas exploration, nuclear energy, railway transport, metallurgy, automotive production, agricultural machinery, construction, pharmaceuticals, and banking, in both 2017 and 2018, said the Head of Trade Representation of Russia in Egypt, Nikolai Aslanov.

“The Trade Representation of Russia in Egypt has organised and conducted visits from 40 business delegations of Russian companies to Egypt, representing more than 70 companies during the period from January to August 2018,” added Aslanov in a recent report that Daily News Egypt received a copy of.

The Russian-Hungarian Consortium Transmashholding-Hungary Kft. won the five-year contract in a tender called in 2017, (which beat out bids by companies from China, Italy, India, and Romania) and signed the contract with the Egyptian National Railways (ENR) in Cairo on September 25, 2018, noted Aslanov, adding that it is a very significant event in Russian-Egyptian trade relations, as it will enhance economic and industrial cooperation.

The contract between the Russian-Hungarian Consortium and EMR is worth €1bn (about $1.2bn, or EGP 22bn), for the delivery of 1,300 passenger carriages, said Russia’s head of trade representation, adding, “this is the largest contract in the history of the Egyptian railways. The contract duration is five years, since the date of its execution, and the period of technical maintenance for coaches is 15 years,” Aslanov explained.

The ENR announced in April a project to renovate the country’s old railway system by 2022, at a total cost equivalent to over €2.6bn, cited the Egyptian railway chief, adding that the deal would contribute to improving the operating efficiency of Egypt’s railways, especially with its current aging fleet of passenger carriages. Most passenger carriages in Egypt’s trains are over 40 years old, the ENR chief added, with frequent breakdowns and high operation and maintenance costs.

The next phase of cooperation in the railway domain includes the construction of a factory in Egypt by the Russian company Transmashholding for the annual production of 200 passenger carriages, with 60% of the carriages’ components to be manufactured locally, indicated Aslanov.

Aslanov noted that from 14 to 15 October, a Russian delegation headed by the President of Tatarstan, Rustam Minnikhanov visited Egypt, adding that the accompanied companies work in the field of oil and gas, automotive industry, petrochemicals, transport engineering, and shipbuilding.

On 14 October Minnikhanov held a meeting with Egyptian President Abdel Fattah Al-Sisi to further develop commercial and industrial collaboration between Russia and Egypt, as well as with the Minister of Trade and Industry of Egypt Amr Nassar, mentioned Aslanov.

Furthermore, on October 15, Minnikhanov and the Russian companies participated in the Business Forum arranged by the Federation of Egyptian Chambers of Commerce, noted Aslanov, adding, “it is expected that until the end of this year, Russian companies engaged in the modernisation of metallurgical enterprises, the construction of railway infrastructure, automotive production, food industry, wood processing, and IT technologies will visit Egypt to conduct negotiations with Egyptian partners, with support from the Russian Trade Representation.”

Moreover, Aslanov said that according to the statistics of the Russian Federal Customs Service, in January to August 2018 the volume of bilateral trade exceeded $4.1bn, with an increase of 28%, compared with the same period in 2017.

Russian exports reached $3.7bn, with a 31% increase, adding that exports from Egypt to Russia stood at $438m, with an 8% increase, in comparison to the same period in 2017.

Wheat topped the main Russian export items to Egypt during the first eight months of 2018, with a 19% increase up to $1.079bn, compared to the same period in 2017, remarked Aslanov.

Russian cereals, metals, and commodities are in high demand in the Egyptian market, elaborated Aslanov, noting that 80% of the wheat imported by Egypt during the 2017-2018 season is of Russian origin.

The main Egyptian export items to Russia during the first eight months of 2018 are fruits, which increased by 19% up to $194m, and vegetables worth $167m.

One current project in bilateral trade is the establishment of an Egyptian logistics centre in Russia, said Aslanov, noting that the implementation of the project will increase the volume of exports and diversify the items of trade.

A MoU on the establishment of the Egyptian logistics centre in Russia was signed within the framework of the 11th meeting of Russian-Egyptian joint committee on trade, economic, scientific and technical cooperation, which was held in Moscow from 21 to 23 May 2018, indicated Aslanov.

Russia’s top oil and gas producer, Rosneft, purchased a 30% stake in the concessions agreement for the development of Zohr gas field, mentioned Aslanov, noting that under the deal Rosneft invested $1.575bn while it will invest over $2bn into Zohr project throughout 2018-2022.

Another large Russian oil producing company LUKOIL has been operating in Egypt in the last 10 years, added Aslanov, highlighting that the company invests about $70m into Egypt annually.

Additionally, Russia and Egypt are working together on establishing of the Russian Industrial Zone (RIZ) in the East Port Said area, mentioned Aslanov, noting that the RIZ will produce products at a total cost of $3.6bn per annum by 2026.

“Total Russian investment into the RIZ will amount to over $7bn, while the project’s implementation may create more than 35,000 jobs,” related Aslanov.