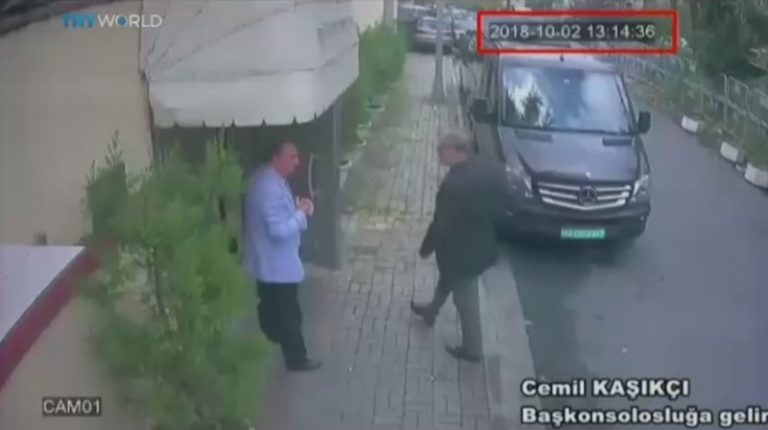 A day after the official Saudi narrative about the “death” of the prominent Saudi journalist Jamal Khashoggi inside his country’s consulate in the Turkish city of Istanbul early in October, a new Saudi official was quoted repeating a new narrative seeming contradicting the official one, which was met by international scepticism.

The Saudi senior government official told Reuters on condition of anonymity that the 15 Saudi nationals who met Khashoggi at the consulate on 2 October, “had threatened him by drugging and kidnapping him and then killing him in a chokehold when he resisted.”

He explained further that the deputy head of the Saudi General Intelligence Presidency, Ahmed Al-Asiri, formed the member-team of 15 security and intelligence forces in a mission to convince Khashoggi to return to Riyadh.

One team member, an operative named Maher Mutreb, spoke to Khashoggi inside the consul’s office, about returning to the kingdom, but Khashoggi refused and told Mutreb that if he [Jamal] did not leave within an hour, there is someone waiting for him outside the consulate and will call the Turkish police, the source added.

The one who was waiting for the journalist was his Turkish fiancée Hatice Cengiz. Khashoggi was also a columnist at the Washington Post.

“When Khashoggi raised his voice, the team panicked. They moved to restrain him, placing him in a chokehold position and covering his mouth. They tried to prevent him from shouting, but he died,” the official said, stressing that “the intention was not to kill him.”

Saudi Crown Prince Mohammed Bin Salman previously told Blomberg that Jamal left the consulate 20 minutes after entering it. The Saudi consulate announced that its cameras were off record during Khashoggi’s visit.

The Saudi insider source revealed that the team’s plan was to hold Khashoggi in a safe house outside Istanbul for a period of time, and to release him after that if he refused to return to Saudi Arabia, but things “went wrong” as the team violated their orders and quickly used violence.

In order to prove to the authorities in Riyadh that Khashoggi left the consulate safely, operative Mustafa Madani then dressed in Khashoggi’s clothes and left the diplomatic facility from the back door, and subsequently got rid of the journalist’s body by rolling it up in a rug and giving it to a local co-operator for disposal, according to the official. Madani then headed to the Sultanahmet district where he disposed of the belongings.

Meanwhile, Turkish authorities who vowed to reveal all the details about Khashoggi’s death announced on Saturday that his killers “may have dumped his remains in the Belgrad forest adjacent to Istanbul, and at a rural location near the city of Yalova, 90km south of Istanbul.” Turkish officials previously said that they had audio and visual evidence about the murder incident of the Saudi journalist.

The Saudi official narrative about Khashoggi’s death says that “the discussions that took place between him and the persons who met him during his attendance in the Kingdom’s consulate in Istanbul led to a quarrel and a brawl with Khashoggi, resulting in his death.”

But the official narrative was faced by a storm of international critics, even from US President Donald Trump, who quickly changed his opinion from describing the Saudi narrative as “credible” to saying that he “is not satisfied with Saudi Arabia’s explanation.”

Despite Arab support for the Saudi account, leaders of Germany, the Netherlands, and France’s Foreign Minister as well as the European Union Foreign Policy Chief Federica Mogherini, expressed concerns regarding the circumstances of the incident, seeking a more credible and transparent explanation.

On Friday, the Saudi prosecutor general opened the investigations into the case with 18 Saudi individuals who met Khashoggi at the consulate, “to hold all those involved in this case accountable and bring them to justice.”