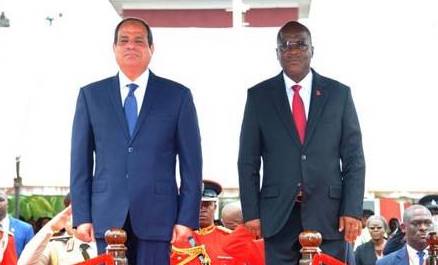 President Abdel Fattah Al-Sisi received on Sunday an invitation from his Tanzanian counterpart John Joseph Magufuli to visit Dodoma to put the cornerstone of the Tanzanian Stiegler’s Gorge dam project, according to a statement from Bassam Rady, the presidency spokesperson.

In a phone call between the two leaders, Al-Sisi accepted the invitation particularly that the Egyptian leading construction company “the Arab Contractors (Osman Ahmed Osman & Co)” is conducting the constructions of East Africa’s largest hydropower dam—located along the Rufiji River in the heart of one of Africa’s largest remaining wild areas, the Selous Game Reserve.

The president stressed Egypt’s enthusiasm to boost relations with Tanzania in all fields in light of the huge economic capabilities of the two countries, and Egypt’s interest in supporting development efforts in the Nile Basin states.

During the conversation, Magufuli expressed appreciation for the historical ties between Egypt and Tanzania, particularly at the economic level, additionally praising Egyptian investments in Tanzania.

The Tanzanian government has allocated $307m for the construction of the 2,100 MW Stiegler’s Gorge hydroelectric plant, with an expected reservoir length of 100 km, covering an area of about 1,350 square km, representing over 40% of the country’s proposed fiscal year (FY) 2018-19 budget.

The hydro-project is expected to provide power for the country’s emerging industries, with plans to export its surplus to other East African countries.

In August last year, President Al-Sisi headed to Tanzania as the first destination of a four-day tour to four African countries including Rwanda, Gabon, and Chad, as part of Egyptian eagerness to boost its relations with other African countries.