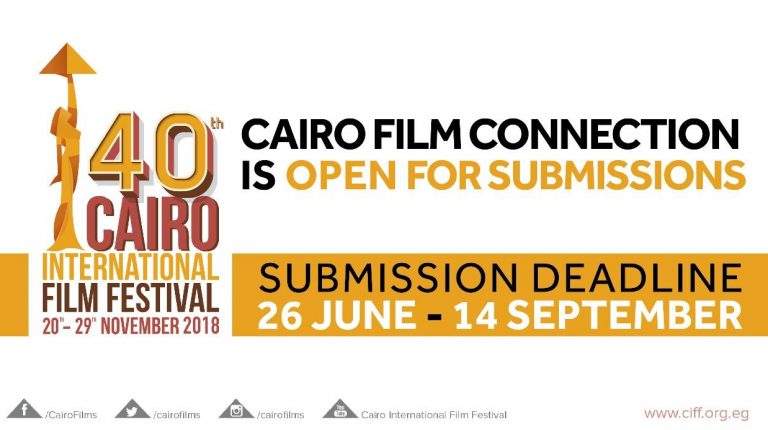 The Cairo Film Connection (CFC) team has received a total of 107 project submissions for feature narrative films and documentaries in development and in post-production.  The film projects came from across Syria, Lebanon, Libya, Iraq, Tunisia, Algeria, Morocco, Palestine, and Egypt.

The CFC received several strong and compelling projects, developed by both established and up-and-coming directors, which made it difficult for the selection committee to put together their initial selection of 15 film projects. The list will be expanded by two or three more projects and announced at the upcoming Cairo International Film Festival’s (CIFF) press conference.

This year, Iraqi Cinema has joined CFC’s partners and sponsors, and will present a monetary award of $5,000 to one of the selected projects. Commenting on that, Zaid Jawad, founder of Iraqi Cinema, says, “The CIFF is one of the most important international film festivals, and its CFC certainly attracts promising film projects. And since we promote Arab films by screening them as part of Iraqi Cinema’s programmes, we also want to support Arab films in post-production, and the CFC is just the place to do that. We are excited about supporting one of the most vivacious selected projects.”

Zaid Kurdi, managing director of New Century Productions, said, “We are glad to be part of this special edition of the CIFF, where we will be awarding one of the Arab film projects selected at the CFC, which reflects our mission of supporting the Arab film industry.”

OSN, one of the CFC’s sponsors, is sponsoring the post-production expenses of the winning film, and will provide a prime-time premiere slot on its top Arabic film channel, OSN YaHala Cinema HD.

Emad Morcos, chief content officer at OSN, commented, “Supporting young talent and encouraging creativity in regional television content is one of the key pillars for us at OSN. In addition to productions from all over the world, we care deeply about stories from the Middle East and North Africa, and believe in using our platform to nurture and encourage tomorrow’s creative talent. The CIFF presents an exciting opportunity in this regard.”

Gamal Guemeih, fund manager of ERGO, formerly known as Creative Media Ventures, at NI Capital, one of CFC’s partners and sponsors that will present a monetary award of $15,000, said, “We are very excited to be part of the 40th edition of the CIFF, as it gives us a platform to support and empower talents in the film industry in their pursuit of world class standards for their projects, to create lasting impressions in the media and film industries.”

Gianluca Chakra, managing director of Front Row Distribution, commented, “The CIFF needs a leader like Mohamed Hefzy, who not only has passion and integrity, but also a great notion and vision of where the actual film business is heading. It is only with people like him that a film festival shall witness huge success, and bring back not only the glorious cinema days, but also help in educating a market and a region that is in dire need of modernisation, quality, and definitely fresh blood.”

During its edition in 2018, the CFC selected projects that represented different issues that irk the Arab world, including women’s rights, living in the throes of war, and the meaning of home and belonging. Affirming the importance and value of all these themes, the selection committee chose films that give voice to these prevalent issues while offering creative and new endeavours in form, as well as in content. The 2018 CFC will showcase some projects by emerging directors, as well as films by well-known directors.

This year’s CFC will host talented Iraqi director Koutaiba al Janaibi, who will be presenting his feature narrative film in post-production, The Woodman, as well as Egyptian director Ossama Fawzy with his new film, Rosy Black, the third in a trilogy of art house films that he made with screenwriter and novelist Mustafa Zikri. Egyptian filmmaker Hala El Koussy will also present her second feature narrative film in development, East of Noon.  She describes her project saying, “In brief, I am a storyteller of daily life, the marginal, the banal, of what is omitted or overseen. I believe in the power of small stories in connecting people across differences, based on what is essentially human.”

In addition to established filmmakers, the CFC will present a number of fresh projects by first-time filmmakers this year. Egyptian-Swiss filmmaker Tamer Ruggli will present his film project, Missed You, which tells an adventurous and fresh story taking place in Egypt. The project offers a hymn to the oriental woman, to her exuberance and freedom.

And from Jordan, director Amjad AlRasheed will present his debut feature Inshallah A Boy. He describes his project saying, “As a man raised in a family that mostly consists of women, I grew up listening to their stories about separation, infidelity, mistreatment, sacrifice, and even abuse. I found myself immersed in their experiences, taken by how unjust life is towards them… As a result, I became determined to use filmmaking to highlight women’s struggles, as well as showcase their coping strategies in responseg to these unjust practices that are a universal reality hiding behind different names.”

In the post-production category, the CFC selected Mayye Zayed’s film Lift Like A Girl. The film follows the journey of Zebiba from the age of 14, as she competes in her first local weightlifting championship, then at the age of 18, until her coach and backbone Captain Ramadan dies. Lift Like A Girl is a long-awaited film on the international scene, and it is expected to receive support in its final stages after screening at the CFC.

Also, the film project When We’re Born by Egyptian director Tamer Ezzat was selected in the feature narrative post-production category. This homegrown project was selected as a film in development, in the first edition of the CFC in 2010, and at the time, the film’s late screenwriter, Nadine Shams, attended its screening along with director Ezzat. The CFC is glad to see that Tamer was able to bring the project back to light.

This year, the CFC is supported by partners who believe in the power and importance of film, including OSN, ERGO, New Century Productions, Front Row Distribution, Aroma Studios, Iraqi Cinema and the Arab Cinema Centre (ACC). These partners will offer cash and in-kind prizes to the selected film projects. The cumulative value of this year’s prizes is over $100,000.

Once Upon a Time in Tripoli | Director: Abdullah El Ghaly | Libya

Longer Will Be the Night| Director: Latifa Said | Algeria

We Are Inside | Director: Farah Kassem | Lebanon