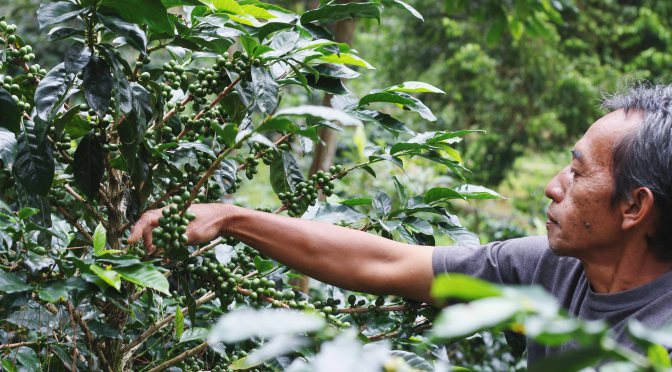 Mul Yati, 47, has worked at the Banaran coffee plantation since 1984, and she became a supervisor at the plantation, adding, “I’ve been working here since the 1980s to help my mother, but I was not a legal worker.”

“The work here is hard, but we got used to as our grandfathers did and we really love it,” said Yati, adding that she works for hours daily. However, working hours extend to 10 hours during harvest season, which include the months from May to September annually.

The Banaran coffee plantation, which dates back to 1908, includes 400 employees in the harvest collecting season, and 250 in regular months.

Yati mentioned that her company provides the workers with gloves and rubbers to protect their hands and feet while working in the plantation, noting, “I use manual sharp instruments while working. However, the company offers some modern equipment that men can control and use, but I can’t so women prefer the manual equipment.”

Noteworthy, Indonesian coffee plantation workers cut coffee trees to suit their personal heights which is why they use sharp instruments.

Yati noted that her salary is sufficient to supply her life needs, mentioning, “my salary is inshallah (God willing) enough. I have a boy and a grandchild, and I don’t have an additional job.”

“Now there are no children working for the plantation, and the worker’s ages are convenient. Personally, I will retire at 55,” announced Yati, adding that she loves drinking coffee, but she cannot drink it for health issues.

According to the International Coffee Organization (ICO) that there are 1.4bn coffee cups drunk daily worldwide.

The world’s top coffee lovers are Finns according to consumption per capital. They grind their way through an impressive 12kg per person, per year.

The ICO noted that Brazil supplied around 80% of the world’s coffee in the 1920s, but that figure has fallen to around a third.

The second exporter is, perhaps surprisingly, Vietnam, followed by Colombia, Indonesia, and Ethiopia.

Dining out in Cairo’s hotels: Tea Time Lounge is great for pre or post dinner drinks