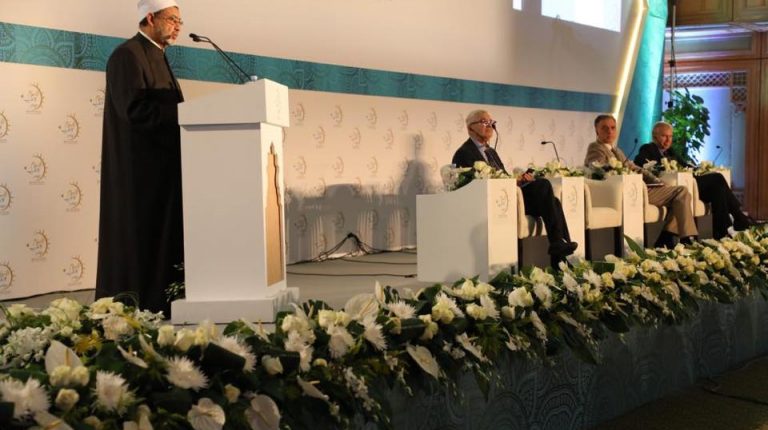 The Grand Imam of Al-Azhar Ahmed Al-Tayeb said on Monday that despite Muslims being described “by brutality and violence….they are only victims of terrorism,” explaining that the reasons behind terrorism are not Islam or any other religion, but global regimes that trade in religions, and morals.

During his speech in the opening of the Al-Azhar’s international symposium under the theme “Islam and the West: Diversity and Integration” Al-Tayeb—who is also the head of the Muslim Council of Elders—added that the Eastern civilisation respects religion and science regardless of their source.

The Grand Imam further said that Al-Azhar’s recent opening up to the largest religious institutions in Europe, and the feedback it received from Western institutions, is real evidence of the possibility of rapprochement between Muslim communities in Eastern and Western communities.

He stressed that the rapprochement has happened and is happening.

Moreover, Al-Tayeb said that “the Holy Quran teaches us that acquaintanceship is the law of relations between nations and peoples,” adding that Al-Azhar University is proud of teaching the Islamic heritage besides Western modern educational curricula. He described Al-Azhar’s curricula shapes the “Azhari mind” which is moderate in thought and behaviour, and able to adapt with the contemporary times, its problems, and requirements.

Leterme pointed out that the West knows that Islam is devoted to democracy and equality, stressing the importance of dialogue [between civilisations and religions] to depend on political, religious, and societal support in order to achieve its goals. He added that there several factors which caused the recent increase in extremism.

Former President of Albania Ragab Midani said that the symposium is important not only for the Middle East but also for Europe, as it establishes peaceful cohesion among communities.