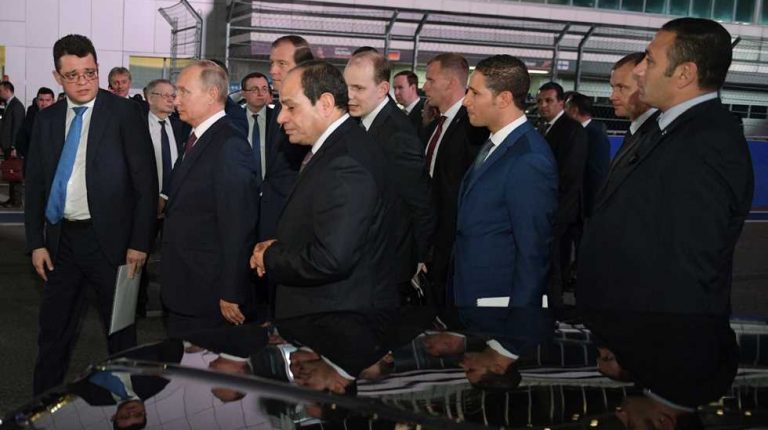 Russian President Vladimir Putin took Egyptian President Abdel Fattah al-Sisi during a visit to Russia on an exploratory tour of a new Russian Uranus limousine, known as the Russian Cortege project, on the Formula One circuit in Sochi.

The two presidents went to the Sochi Autodrome, which hosts the Russian Grand Prix after their bilateral meeting and joint press conference.

Russian Minister of Industry and Trade Denis Manturov presented models of various Russian Uranus cars, including the Sinet and the Arsenals. President Abdel Fattah al-Sisi expressed his desire to know more about these cars. Putin suddenly decided to take al-Sisi on a tour of the Aurus Limousine.

The name Aurus comes from the Latin word Aurum—where Aurum means yellow or gold, and the rus added to it at the end signifies Russia—which was manufactured to become part of the Russian Cortege project led by Russian President Vladimir Putin.

Later this year, the UAE’s Defense, Security and Development Fund signed an agreement for a joint venture for the Aurus car industry with investments of up to €110m. The funds will be allocated for the development and production of luxury cars under the brand new Aurus.

Last month, Minister of Public Enterprise, Hisham Tawfik, met with Nikolai Aslanov, head of the Russian Commercial Representation Office in Egypt, and a representative of a Russian company working in the field of heavy industries, in the presence of Medhat Nafie, chairperson of the Holding Company for Metallurgical Industries.

During the meeting, the minister welcomed the possibility of discussing possible cooperation between the ministry’s companies and the Russian side in various fields, especially the automotive industry, referring to the proposed general framework for the development of Al-Nasr Automotive Company.

For his part, the Russian commercial representative expressed the interest of the Russian automotive manufacturers to participate in the development of Al-Nasr Automotive, and develop the system of automotive feeder industries, since Russian companies have experience in this field.

So, we will just have to wait and see if Putin and Sisi’s experience will become a strong motivator to finalise future automotive deals, and promote the industry in Egypt supported by the strong Russian bear!