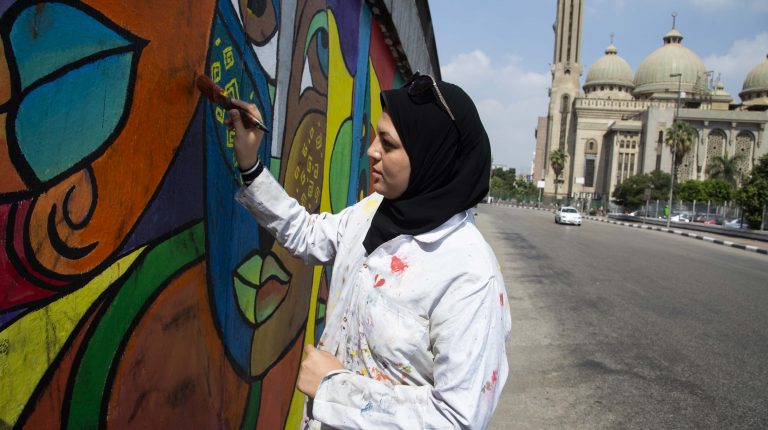 When few students of  Faculty of Specific Education started making one of the murals at Ain Shams  University, they did not think that this would be the start of a large local initiative which changed the majority of Al Waili district’s diminishing walls into bright colourful graffitis. 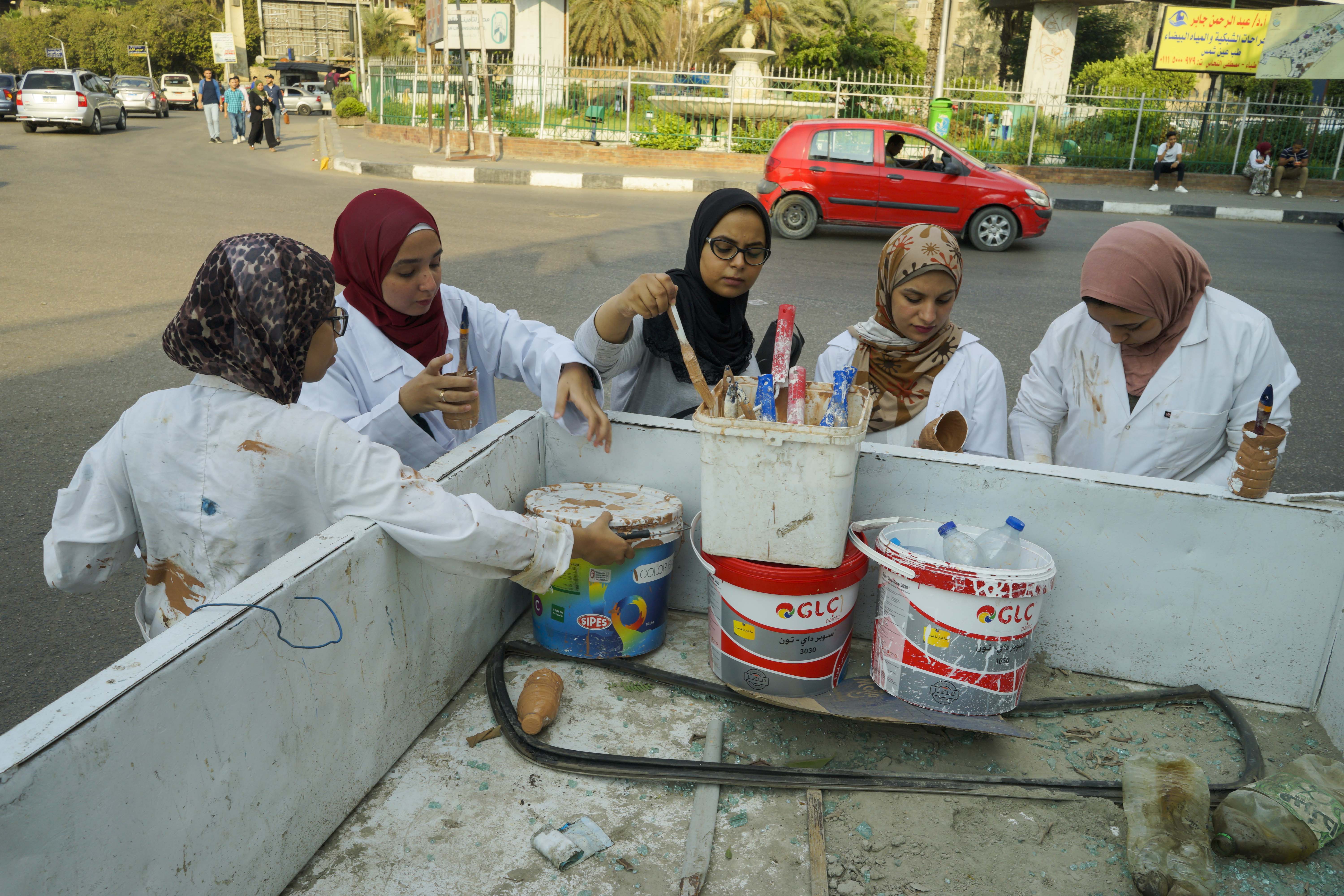 “Together We Rise” is a student initiative aims to decorate Al-Waili district through colouring its walls and drawing graffiti and murals on them.

For many years, the faculty students wanted to change their surrounding environment. With grey dirty walls all around the university, each sprayed with curses, or written marks by anonymous passengers, redecorating the walls with graffiti was their attempt into beautifying reality.

“Together we Rise is our attempt to spread the meanings of beauty, morals and ethics again” said Noha Abdel Aziz, a doctor at the faculty of specific education and the founder of the initiative, “it;s not just a graffiti, it is a way of adding a Bright delightful taste of art in people’s lives.”

130 students took part in the initiative, dividing themselves into shifts working from 9 am until 9 pm in order to have the work done within a few weeks.

The faculty arranged with the municipality to facilitate the process to students, “and with no hesitation, it approved doing so.”

The initiative redecorated the walls of Abbassia Bridge,  the university’s dorms and the Metro station.

“The municipality asked us to start redecorating these three spots. They are the ones with the largest empty, dirty walls, and the ones that it received the fund to embellish,” Abdel Aziz asserted.

“We believe that when people see the beauty of the coloured walls, they will no longer write swear words or the things they usually did. That’s how we believe their attitude will change,” Abdel Aziz explained.

Abdel Aziz explained that all of the volunteering students believed it was their responsibility towards the community to make the streets look better, through graffiti. 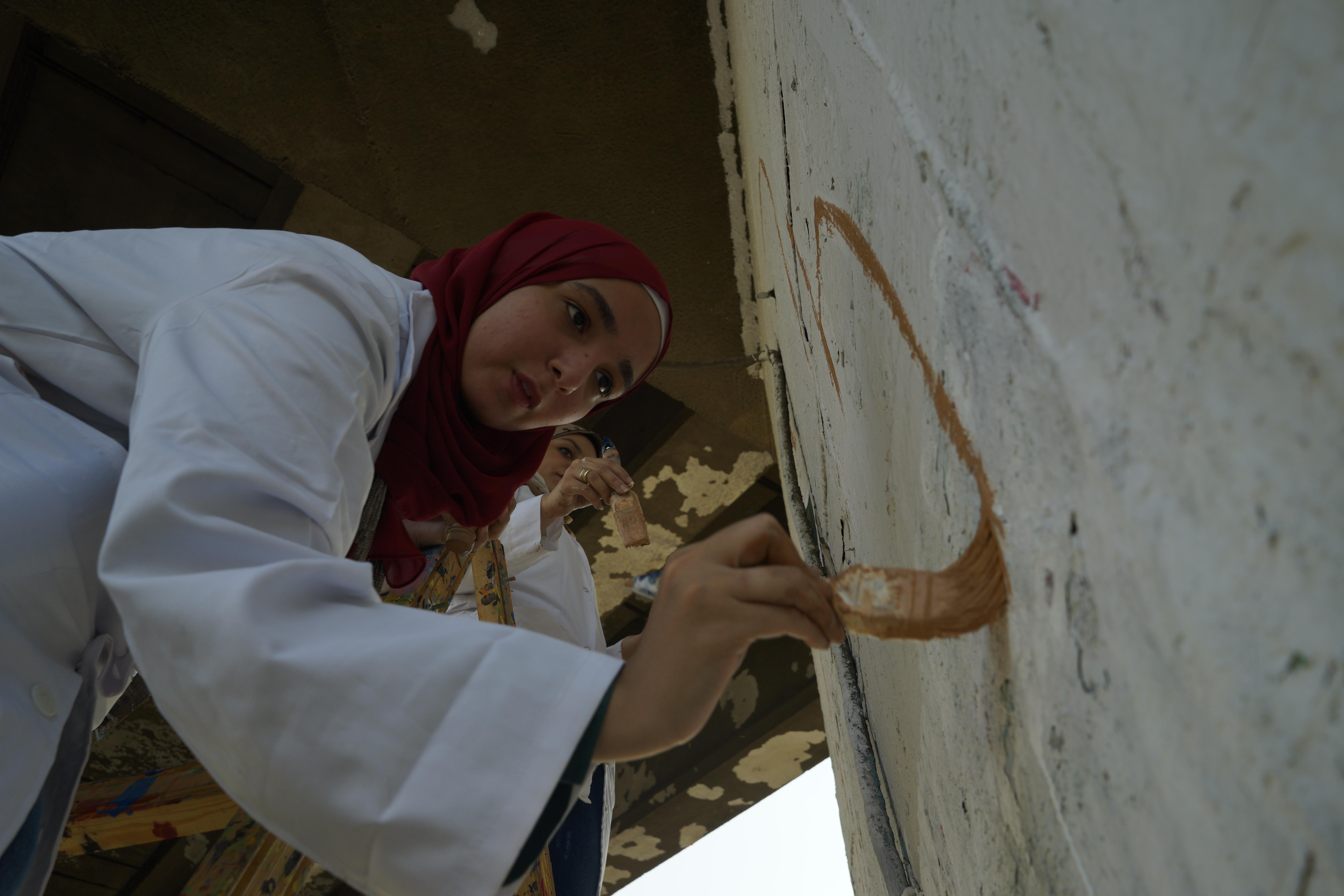 The initiative expanded to other districts and neighbourhoods on the hands of the students.

“Many of them already did graffiti on their homes’ walls, and the others are trying to convince their neighbours to redecorate their houses and street pavements,” Abdel Aziz asserted.

For the drawings, the students decided to reflect the Egyptian culture with a modern twist. At the walls of the female dorms, contemporary art portraying women was all that the walls were about.

“We could not deny the role of Egyptian women, as an icon in everyone’s life. Whether a mother, a sister or even a wife, honouring Egyptian females was a must,” Abdel Aziz added.

Other murals reflected Egypt’s environment and society through abstract art.

“Bright colours are the main element used among all of the murals. Applying bright fluorescent colours is all that these murals are about. They help us deliver an alluring message about beauty,” she concluded.

All photos were taken by Asmaa Gamal

Topics: Al-Waili students Together We Rise