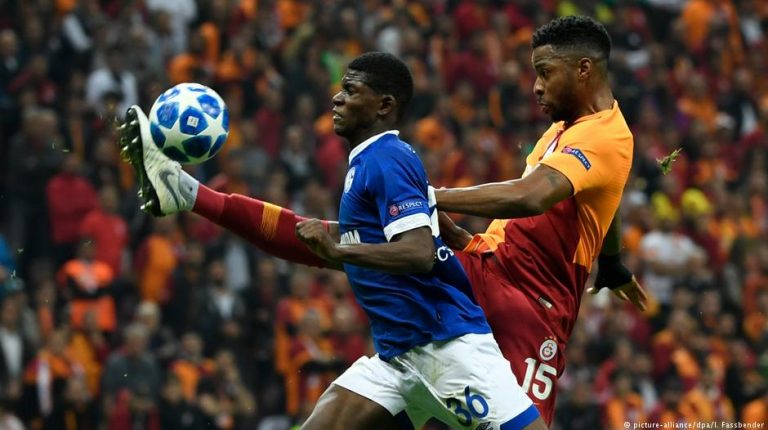 Domenico Tedesco’s season has been endured rather than enjoyed so far, but in Europe there have been bright moments. His Schalke side came agonisingly close to providing another one in Turkey.Galatasaray 0-0 Schalke

In an intimidating atmosphere in Istanbul, Schalke showed plenty of grit but not enough quality as Breel Embolo missed a handful of glorious chances for the visitors.

Domenico Tedesco's side quickly found themselves in a gritty European game with both sides playing well but unable to thread the final pass. Teammates were either offside or in the wrong spot at the time of the pass, leaving the game goalless but not short of excitement.

With Ralf Fährmann still out, Alex Nübel started his first Champions League game and was forced into action inside the opening 10 minutes when he punched away a swerving drive from Garry Rodrigues.

Fernando Muslera's raised boot floored Yevhen Konoplyanka as he broke into the box, but no penalty was given.

Just before the break, both keepers made brilliant saves to keep things level. First, Nübel's face denied former Bundesliga player Eren Derdiyok from just yards out, and then Muslera made a diving save to tip Konoplyanka's shot over the bar.

Embolo out of form

After the break, Breel Embolo missed a glorious chance to give Schalke the lead. The Swiss, just seconds into the second half, had almost too much time to decide where to put his shot and both his first effort and his rebound were saved by Muslera.

Worse was to come for Embolo. A perfectly placed cross fell to him at the back post, but with the goal gaping Embolo could only fire away from the empty net and into Muslera's body. Remarkably, Muslera turned the ball into his own net but was saved by the offside flag.

Both sides began to tire, but with Galatasaray making sloppy errors it was Schalke who continued to look the more likely to score. With time running out, sub Steven Skrzybski nearly made headlines but Muslera was on hand again.

The result leaves Schalke with a healthy five points from three games, but it'll take a while to digest their frustration at not having more.