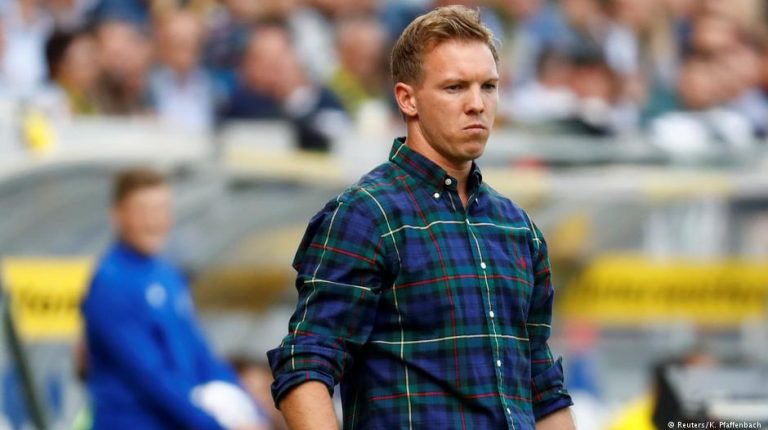 Julian Naglesmann has set Hoffenheim on an upward curve since he took charge. But another Champions League display undermined by indvidual mistakes hints at why he’s agreed to move on at the end of the season.The verdict from Hoffenheim's players and coach after their 3-3 draw with Lyon on Tuesday was close to unanimous.

"We only have ourselves to blame," said center back Ermin Bicakcic. "We simply gifted the opposition the goals," said Germany's Nico Schulz. "They were basically three own goals," said Czech international Pavel Kaderabek. "Three goals should've been enough [for us to win]," summarized their boss.

Hoffenheim have led in each of their three Champions League group stage games and are yet to emerge with a win. Despite dominating their French visitors in a frenzied, vibrant attacking display on Tuesday, they needed an injury time equalizer from Joelinton to rescue a point.

First came a dreadful backpass from captain Kevin Vogt, then Oliver Baumann failed to adequately cover his near post and finally Kevin Akpoguma horribly misjudged the flight of a ball, then compounded the error by panicking and allowing Memphis Depay to streak away and score.

This was not a case of higher level opponents taking advantage of chinks in the armor, but rudimentary errors that top level players should make much less frequently than Hoffenheim's defenders do.

It's not the first time this has cost them this season. Stefan Posch's indecision and poor touch allowed Manchester City's David Silva to snatch victory late on Champions League matchday 2, Vogt gave away a needless penalty that allowed Fortuna Düsseldorf to take their first win back in the Bundesliga and Baumann's mis-judged charge allowed Ante Rebic to put Eintracht Frankfurt ahead after Hoffenheim quite literally threw him the ball earlier this month. The list goes on and has proved costly both at home and abroad.

As he has since taking over a seemingly doomed club in February 2016, Nagelsmann got so much right on Tuesday night. He left Schulz and Bicakcic high and wide and the wingbacks exploited the space left by the tendency of Lyon's wide forwards not to track back. Kerem Demirbay, the side's creative heartbeat, was then able to operate in the spaces opened up by the central midfielders moving wide to cover the flanks. Those three Hoffenheim men were responsible for making the three goals, while Demirbay should also have added one himself.

While there may be some questions raised over the coach's decision to omit Reiss Nelson, who has scored a goal every 41 minutes in the Bundesliga but played just 22 minutes in Europe, there is only so much a coach in Nagelsmann's position can do about elementary mistakes.

By and large, his time at Hoffenheim has been notable for the way his intensive training ground work his improved players, but even a coach of Nagelsmann's intensity and ingenuity can only take players so far.

Over his two full seasons in charge, Hoffenheim have seen Sandro Wagner, Niklas Süle, Jeremy Toljan, Sebastian Rudy, Mark Uth and Serge Gnabry depart, bringing in more money than has been spent on replacements. While some of those brought in have promise, it's all but impossible to keep improving while failing to spend.

As such, Nagelsmann has been left with a set of central defensive options that leave much to be desired and a mixture of quality and potential elsewhere. Given the size of Hoffenheim and relative lack of resources, it's difficult to see that changing and equally difficult to see how they can progress further than finishes of fourth and third.

The team he will join at the end of this season have already surpassed that while Nagelsmann has been in Sinsheim, with RB Leipzig finishing second in 2016-17.

While the Red Bulls finished below Hoffenheim last term, they view the 31-year-old as the right man to get the most out of their vast collection of unpolished diamonds, chief among them center backs Dayot Upamecano and Ibrahima Konate.

With the increased financial backing Nagelsmann is sure to get from the Red Bull franchise, there should come a higher quality of players and less mistakes. Maybe then we'll see just how far this talented young boss can take a team.