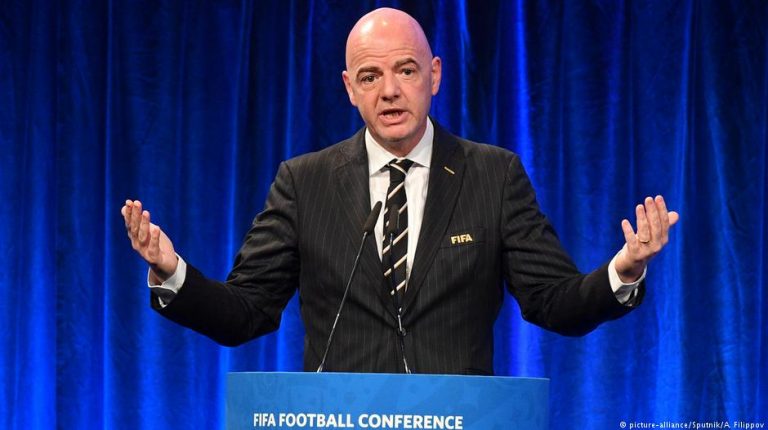 World’s football governing body will meet this week to discuss the expansion of the Club World Cup. President Gianni Infantino is doubling down on a plan that has been staunchly rejected by European organization UEFA.Ahead of this week's FIFA Council meeting in Rwanda, president Gianni Infantino plans to propose an expanded annual Club World Cup, the Associated Press (AP) reported, citing an anonymous source.

Infantino's proposal is an amended version of his initial plan to hold a 24-team Club World Cup every four years, between June and July, beginning in 2021. He now wants to hold the tournament on a yearly basis, AP said.

The expansion of the Club World Cup has been met with resistance from UEFA, as the new tournament could directly compete with the Champions League. Half of the team slots in FIFA's Club World Cup would be filled by European clubs.

Since March, the European bloc has sought to hinder Infantino's efforts to gain approval for new FIFA competitions.

Read more: What are these reports of investors looking to buy FIFA tournaments all about?

Investor money on the line

FIFA's new tournaments plan also includes a global Nations League, as well as the Club World Cup. Both were formed in order to replace or upgrade two largely unloved competitions: the current annual seven-team Club World Cup, held in December, and the Confederations Cup held every four years, on the eve of the FIFA World Cup.

The potential new Club World Cup is set to be worth at least $3 billion (€2.6 billion) per tournament, according to the original proposal submitted in April. It counted on a $25 billion guarantee, for a period of 12 years, from an international consortium that includes Japan's SoftBank, which is backed by Saudi Arabian investors, among others.

FIFA would retain a 51 percent stake in the joint venture.

Infantino is moving forward with what has been considered the biggest revamp of international foorball tournaments this century. According to AP's source, Infantino's tournament revamp has received support from all regional confederations, except for UEFA.

Discussions with global football organizational leaders in recent months have encouraged Infantino to double down on the Club World Cup and to back an annual tournament with more teams, AP reported.

But other roadblocks stand in his way. For one, holding a yearly summer tournament would threaten the already established pre-season club friendlies, organized by Relevent Sports of Miami Dolphins owner Stephen Ross.

Additionally, the umbrella European Club Association has also complained about the increasing number of tournaments and called for a reduction of players' workloads.

In Rwanda, Infantino does not plan to settle the question of the Club World Cup's format, but simply to get secure agreement on the premise that the Club World Cup and Confederations cup must be replaced, AP's source said.

The details on how to hold the tournaments and when are expected to be ironed out in the following months.