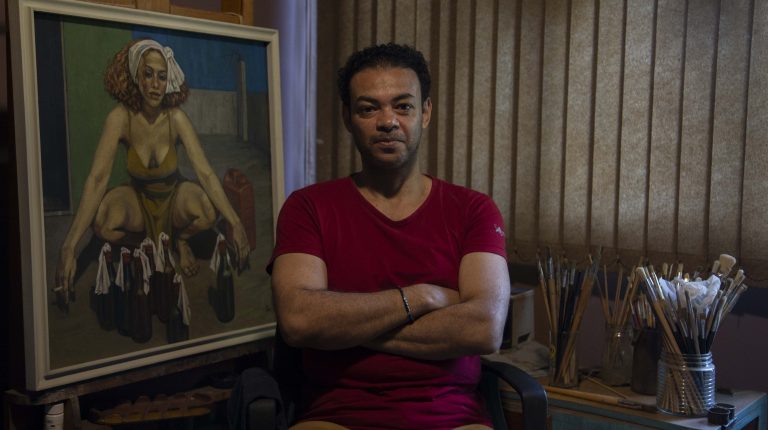 The sun rays slipped through the huge window of Egyptian ‎artist Walid Ebeid’s studio, as a symphony of Ludwig van Beethoven was playing during a 2018 September noon.

Ebeid, who was born in Cairo in 1970, comes early every day before 9:00 am to his small studio in Mohandessin neighbourhood to work on his paintings, a daily routine he never gives up since he started his career.

His easel was positioned next to the window, as the sunlight offered him natural light during his painting process. His latest painting featured a woman subjected to physical violence, entitled “lewd act.” 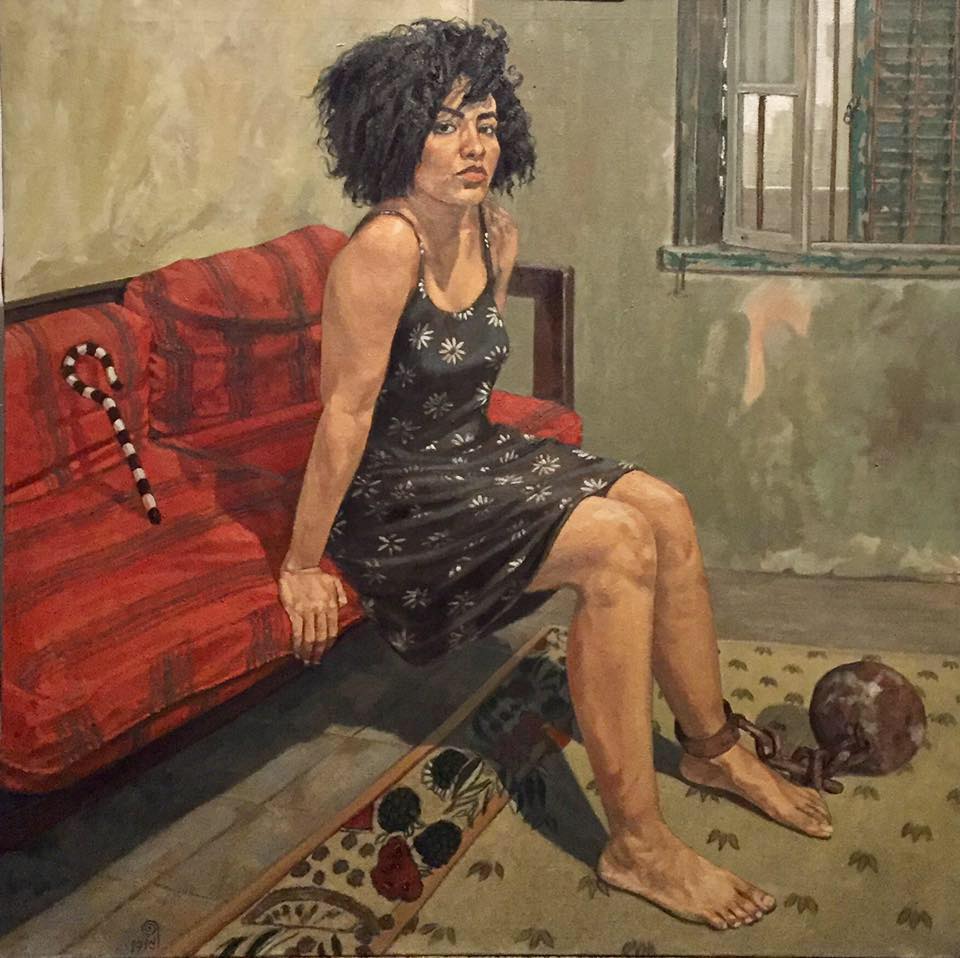 “People consider me a feminist. However, I am not,” said Edeid, adding “this doesn’t mean I don’t support women, but it means I am generally biased for humanity, vulnerability, and injustice. This is why women are mostly featured in my paintings because they are oppressed and stripped of their rights,” Ebeid said.

“Additionally, women are a symbol of the homeland, Egypt, which I believe faced radical changes in recent decades,” he added.

In addition to portraying characters, Ebeid is passionate about nature, as he spent eight years of his childhood in Yemen, which left a significant impact on his talent according to him.

“Yemen is a charming country. It is very inspiring for any artist. I was lucky I lived there for a while. it shaped my imagination and identity,” said Ebeid.

Ebied and his family moved to Yemen in the 1970s, before the Sixth of October War in 1973. His father was an army officer and an Arabic language teacher, who was sent to work in Yemen as a teacher.

“We spent those years in a real heaven in Al Qa’idah. The outstanding nature established my visual imagination. I believe this what distinguished me from my colleagues who lived in Egypt, as I was surrounded by beautiful scenery full of mountains, hills, and falls.”

Ebeid’s family was not in Egypt when the war broke out. But they were surrounded by huge support from their Arab brothers, which made them feel Yemen was their second home, according to him.

“During the October 6th war, the Arabs were very proud of us. Yemenis dealt with us as if we were enrolled with the Egyptian forces fighting the war. We felt very proud of our country at that time.”

In 1979, Ebeid’s family returned to Egypt. He recalled how Egypt was a beautiful country at that time. “I used to play football with friends in the streets which were full of coloured leaves and trees. All this is now replaced with traffic, dust, and crowds. It has really changed a lot,” he noted.

Ebied started oil paintings when he was 8, and his father really supported him. “My father realised I was interested in paintings and sketches. He used to take me out with oil pastels and a small easel. He kept those early sketches and I took them after years.”

In Cairo, he studied at the Faculty of Fine Arts, Helwan University. After graduation, he refused to work as an assistant professor, and chose to be an independent artist. 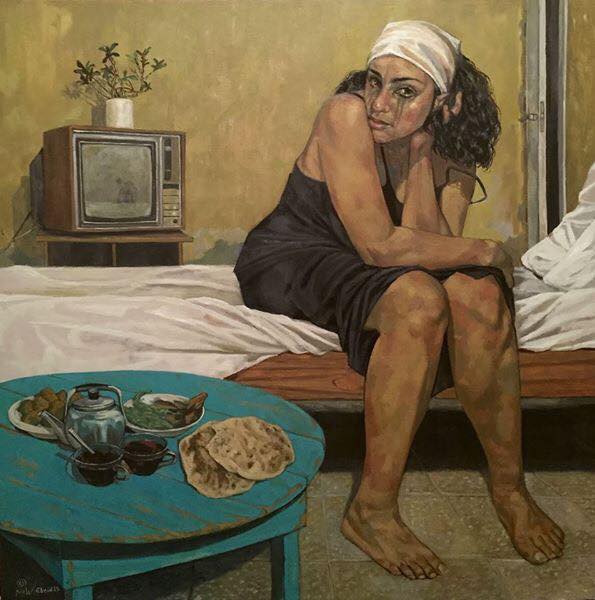 “I just wanted to be an artist. And I believe I was lucky, as former Minister of Culture Farouk Hosny saw my paintings at the graduation ceremony and supported me in my first exhibition.”

Ebeid added, “he asked me to meet him in his office, and then offered me an opportunity to exhibit my paintings at one of Cairo’s most prestigious art places. This was a significant step in my early career, though I did not sell any of my works during the exhibition,” he recalled with a smile.

“On the exhibition’s last day, a woman asked me to buy one of my paintings for less than its actual price for her daughter’s matrimonial home. She did not have the entire amount -EGP 3,000. I gave it to her as a gift, and I believe this woman was my lucky charm as after that all my paintings were sold only two weeks later.”

During his long career, he explored many topics including philosophical, social and political issues. His family library, which he inherited from his parents, contributed towards building his identity as an artist.

He reads in philosophy and literature and has his own technique in painting. “I can’t imagine a painting without a meaning or an idea. Even initial sketches of my paintings should have connotation.”

Ebeid added, “Some artists paint characters just for the sake of painting but without any meaning. What is the point of the painting? What do you they want to convey? Usually nothing.”

However, he acknowledged that he was too philosophically-oriented during his early career. “I know I was a little bit of a philosophical artist, but after a while, I decided to get involved in people’s lives, and address their suffering and daily problems or troubles,” he said.

He believes that this the artist’s role, to be partial towards people and address their rights, hopes and demands for a better life. “It is impossible to meet a right-wing artist. All artists are leftists. Art is a revolution; can you ever find a right-winged revolution? If I was not a revolutionary person I would never be able to paint,” he said. 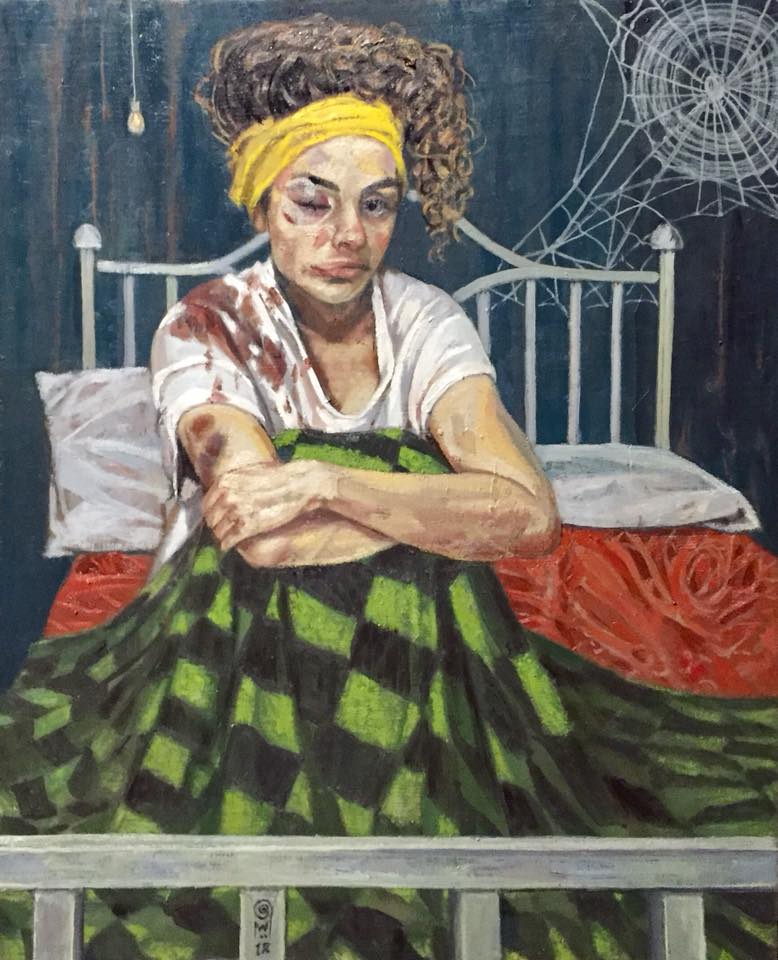 Ebeid said he took part in the 25thof January revolution 2011. “If a day passed without the presence of a woman among us, I never felt safe. This means women are symbols of security and safety.”

In order to paint the iconic Egyptian singer Abdel Halim Hafez, he visited his house and spent time there to discover his real character and mannerisms, to represent a very deep version of the prestigious artist, according to him.

“When I visited his house, I found out why I adored him. He was a kind-hearted man who was keen on helping people, even if he did not know them personally. He was everyone’s father, sons and daughters of his colleagues or people who worked with him, and he always supported them,” Ebied said.

However, those musicians’ paintings received substantial positive reception from his fans, yet, Ebied believes that years from now, people will remember other paintings. “They are not my best work, but of course I am proud of them,” concluded Ebied.