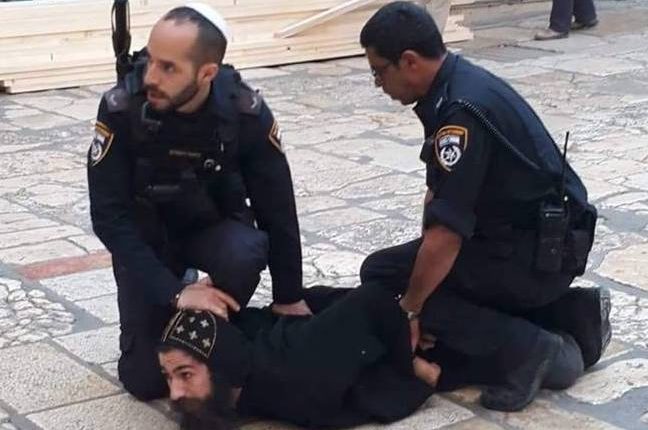 Israeli security forces assaulted on Wednesday morning a number of Egyptian Coptic Orthodox monks in front of the Church of the Holy Sepulchre, in the Old City of East Jerusalem, and detained one of the priests, according to the Palestinian Ma’an News Agency.

Several Egyptian protestors were wounded during the Israeli assault.

The Israeli assault came after priests from Coptic Orthodox Church in Jerusalem protested near Deir Al-Sultan Monastery, against an Israeli decision which denies that the church the right to conduct the needed renovation work inside the monastery which is located on the roof of the Church of the Holy Sepulchre.

The Egyptian Copts rejected any amendments on the roof of the monastery from the Israeli side, or that of the Ethiopian Coptic Church. The latter claims ownership of the Egyptian monastery.

Despite the Egyptian rejection, the Israeli local municipality of Jerusalem wanted to conduct unauthorised renovation work for the Ethiopian Coptic Church section. The Israeli move came without the approval of the Egyptian Coptic Orthodox Church.

Egypt has historical rights in the Deir Al-Sultan Monastery in Jerusalem since the holy site was gifted to the Egyptian Coptic Orthodox Church by Sultan Salah Al-Din Al-Ayouby after he liberated Jerusalem from the crusaders in 1187. Egyptian monks have been living at the monastery for over 200 years.

Jerusalem’s Christian National Assembly issued a statement denouncing the “barbaric attack by [Israeli] occupation forces against Coptic monks in the church’s courtyard”. “This attack… comes within the context of the ongoing persecution of non-Jews in the occupied city of Jerusalem,” said head of the assembly Dimitri Daliani.