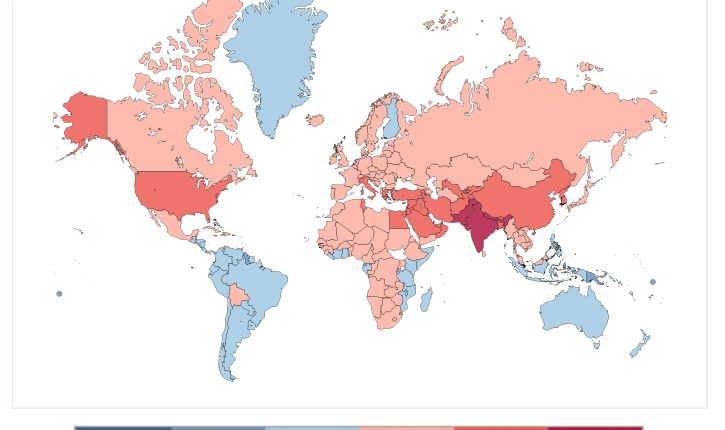 Nine to 33 million visits to the emergency room (ER) for asthma worldwide may be triggered by breathing in air polluted by ozone or fine particulate matter pollutants that can enter the lung’s deep airways, according to a study published recently in the journal Environmental Health Perspectives.

Scientists have long known that breathing in air sullied by car emissions and other pollutants could trigger asthma attacks. However, the new study is the first to quantify air pollution’s impact on asthma cases around the globe.

“Millions of people worldwide have to go to emergency rooms for asthma attacks every year because they are breathing dirty air,” said Susan C. Anenberg, lead author of the study and an associate professor of Environmental and Occupational Health at the George Washington University Milken Institute School of Public Health (Milken Institute SPH). She added,”our findings suggest that policies aimed at cleaning up the air can reduce the global burden of asthma and improve respiratory health around the world.”

Asthma is the most prevalent chronic respiratory disease worldwide, affecting about 358 million people. The new findings suggest that car emissions and other types of pollution may be a significant source of serious asthma attacks.

The team of authors first looked at emergency room visits for asthma in 54 countries plus Hong Kong, and then combined that information with epidemiological exposure-response relationships and global pollution levels derived from satellites orbiting the earth.

According to the study nine to 23 million annual asthma emergency room visits globally (8 to 20% of total global asthma ER visits) may be triggered by ozone, a pollutant generated when car, power plant and other types of emissions interact with sunlight. Also, five to 10 million asthma emergency room visits every year (4 to 9% of total global asthma ER visits) were linked to fine particulate matter, small particles of pollution that can lodge deep in the lung’s airway tubes.

About half of the asthma emergency room visits attributed to dirty air were estimated to occur in South and East Asian countries, notably India and China. Although the air in the US is relatively clean compared to South and East Asian countries, ozone and particulate matter were estimated to contribute 8 to 21% and 3 to 11% of asthma ER visits in the US, respectively, according to the study.

To estimate the global levels of pollution for this study, the researchers turned to atmospheric models, ground monitors, and satellites equipped with remote-sensing devices.

Daven Henze, who is the principal investigator on the project and an associate professor for the University of Colorado Boulder said “the value of using satellites is that we were able to obtain a consistent measure of air pollution concentrations throughout the world,” adding that “this information allowed us to link the asthma burden to air pollution, even in parts of the world where ambient air quality measurements have not been available.”

According to the authors, countries like India and China may be harder hit by the asthma burden because they have large populations, and tend to have fewer restrictions on factories belching smoke and other sources of pollution, which can then trigger breathing difficulties.

Findings of the study pointed out that approximately 95% of the world’s population lives in places with unsafe air. Previously, the Global Burden of Disease Study focused on quantifying the impacts of air pollution on heart disease, chronic respiratory disease, lung cancer, and lower respiratory infections – finding that fine particulate matter and ozone were associated with 4.1 million and 230,000 premature deaths in 2016, respectively.

Lead author Anenberg said “we know that air pollution is the leading environmental health risk factor globally,” adding “our results show that the impact of global public health range from breathing dirty air are even more far reaching, and include millions of asthma attacks every year.”

To reduce the global burden caused by asthma, Anenberg suggests that policymakers aggressively target known sources of pollution such as ozone, fine particulate matter, and nitrogen dioxide. She further explained that policies which result in cleaner air might reduce not just the asthma burden but other health problems as well. One way to reduce pollutants quickly would be to target emissions from cars, especially in big cities. Such policies would not only help people with asthma and other respiratory diseases, but it also would help everyone breathe a little easier, Anenberg concluded.