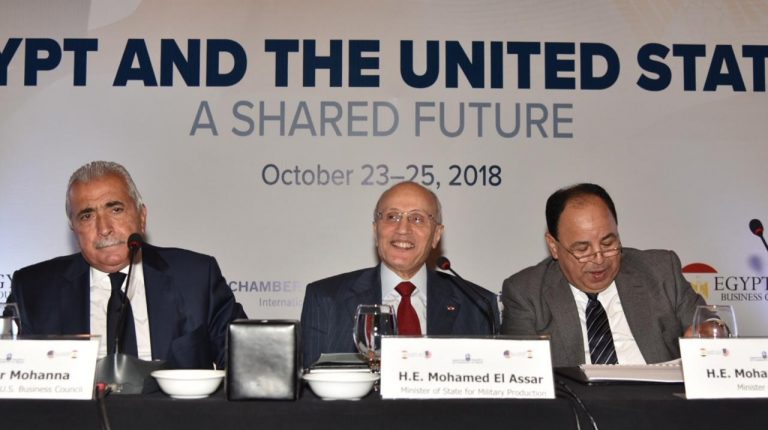 President Abdel Fattah Al-Sisi called on American companies to visit the infrastructure projects carried out by the Egyptian government during the past period, such as the New Administrative Capital and the New Suez Canal, according to Tarek Tawfik, head of the American Chamber of Commerce in Cairo (AmCham).

Tawfik said a small delegation from the mission would visit several industrial areas on Thursday before the delegations heads back to the US.

“We will try to arrange another visit soon focusing on visiting important Egyptian projects to inform US companies and encourage them to pump more investments,” he added.

President Abdel Fattah Al-Sisi met yesterday with representatives from the US mission during a two-hour long meeting, in which he sent a positive message about the priority of investment to the Egyptian government during the coming period.

In a meeting between the delegation and Mohamed Moeit, Egypt’s minister of finance, he said that Egypt has succeeded in overcoming many of the economic difficulties in the past period.

He pointed out that most economic indicators reflect significant progress during the recent period. The unemployment rate fell to 9.9%, he said, adding that the budget deficit also fell from 16.7% in 2016 to 9.8% this year, while the government projects grew by 8.4% at the end of the year.

The Minister of Finance explained that the growth rate of the Egyptian economy amounted to 5.8% and that most of the growth is the outcome of conversion industries.

The government aims to reach 8% by the end of 2020/21 and reduce energy subsidies at the end of the current fiscal year (FY) to 2% , indicated Moeit.

US economists expected to start negotiations on a trade agreement between Egypt and the US as a form of cooperation and strategic dialogue between the two countries.

“Egypt is one of the most important countries in the region,” said Greg Lebedev, senior advisor to the President and CEO of the US Chamber of Commerce. He explained that the reforms carried out by the Egyptian government opens the door for great cooperation and establishes economic partnership.

Lebedev stressed the existence of opportunities to start free trade negotiations with the government’s enthusiasm to continue the reform programme and fight against bureaucracy.

Thomas Goldberger, chief of mission and chargé d’affaires of the US in Egypt highlighted that the USAID will play a bigger role in the coming period to help the private sector counter the challenges facing investors in the market.

Omar Mehanna, chairman of the Egyptian-American Business Council, said that the Egyptian-US Free Trade Agreement (FTA), including the launching of a free trade area with the US, will be presented during the discussions.

According to the latest data from the Central Bank of Egypt (CBE), the total amount of US investments in Egypt in the first nine months of the last fiscal year (FY) amounted to $1.6bn, while investments two FY ago amounted to $1.8bn.

According to the Ministry of Trade and Industry, the volume of trade exchange between Egypt and the US during 2017 amounted to $5.6bn against $4.97bn in the previous year, up by 13%.