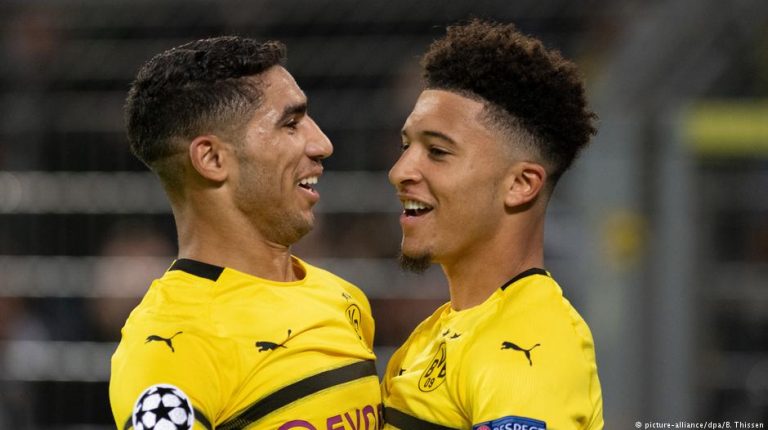 Full backs don’t often hog the limelight in a 4-0 win. But Achraf Hakimi’s three assists capped a strong display against Atletico Madrid, one which suggests there’s reason to believe BVB can sustain their strong start.There was a moment, 66 minutes in to Borussia Dortmund's clinical destruction of Atletico Madrid, where shades of last season's Dortmund threatened to creep in, where inexperience got the better of fearlessness and frustration was close to the surface.

Marco Reus had just dropped the shoulder and burst towards goal when Achraf Hakimi came from an offside position on the left to take the ball off his toe and waste a golden opportunity. The Dortmund captain was visibily annoyed by the 19-year-old's decision and gave his teammate both barrels.

Rather than crumble, as Dortmund's players often did under pressure both internal and external last term, Hakimi stepped it up a notch. Seven minutes later, after he was released down the same flank by substitute Mahmoud Dahoud, Hakimi looked up and picked out the run of another sub, Raphaël Guerreiro, who lashed home BVB's second.

On the touchline, Lucien Favre briefly covered his face, before revealing an expression that was a mixture of joy and utter disbelief. His young side, without the prolific Paco Alcacer – their only recognized striker – had just gone 2-0 up against one of Europe's best sides and, yet again, his substitutions had made an enormous impact.

That goal, more than the one that preceeded it and the two that followed, was an illustration of so many of the things BVB and Favre have got right this season. The move was executed with decisive precision and pace, young players and substitutes were involved and Guerreiro was scoring his first of the season.

Fifteen different players have scored for the Bundesliga leaders this term, a number at least three more than any of the leaders of the other four big European leagues and four more than Bayern Munich.

Guerreiro, who also scored the fourth, follows Alcacer, Jadon Sancho – who notched from the bench yet again – and several others in making a significant impact after starting the match on the sidelines. "Our substitutes just have quality. They know what they have to do," said Favre, as if it had just been a simple case of miscommunication all along.

Brain fade aside, Hakimi, on a two year loan from Real Madrid, was excellent against his parent club's city rivals despite playing on the flank where he's less comfortable. The Madrid-born Moroccan international has added pace and dynamism to an area that's been an issue for Dortmund for some time and looks a capable replacement, both short and long term, for aging club stalwarts Marcel Schmelzer and Lukasz Piszczek. Making his loan deal permanent looks almost as vital as it does with Alcacer.

"Achraf is extremely important for us on the wing, he's quick and times his runs well into the box," said Reus, who'd clearly forgiven his teammate for his blemish.

Another man who has been critical to Dortmund's resurgence under Favre, is Axel Witsel. The 29-year-old opened the scoring on Wednesday with a deflected effort and once again controlled the midfield. The €20 million signing from Chinese club Tianjin Quanjian has arguably been the most important cog in Favre's Swiss-built clock.

The Belgian international has added steel, guile, composure and vision to a midfield that had often lacked those qualities, particularly the first. His pass accuracy rate is over 92 per cent and he's chipped in with goals against Atletico and RB Leipzig while exuding authority and leadership in a young side.

Witsel's importance is highlighted by the fact he's played the third most minutes (behind Reus and Abdou Diallo) of Dortmund's outfielders this term, despite the competition for places in the middle of the pitch being more fierce than in any other area.

Despite that, and the continued brilliance of Reus, the most encouraging sign for this Dortmund side is that, for a change, they don't seem to be overly-reliant on individuals. This is a proper team.