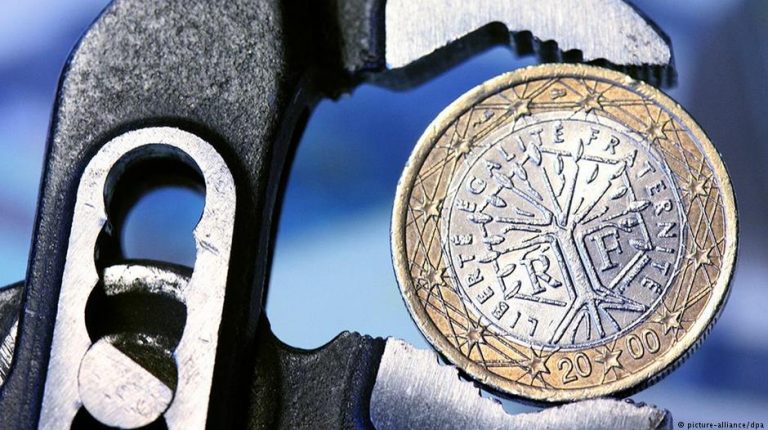 Only 18 months into his first term, French President Emmanuel Macron may want to lecture Italy on the merits of fiscal fastidiousness all he likes. But France’s budgetary garden doesn’t look that much rosier.When French Finance Minister Bruno Le Maire meets his Italian counterpart Giovanni Tria on Thursday, the more cynical of observers may ask what lessons Rome can draw from France's example of belt tightening, or more precisely perhaps, the lack thereof.

When he last visited Rome, in September, Le Maire reportedly intended to tell the new government that Italy's budget deficit must not breach any prescribed EU limits. But he left with his tail between his legs, having had to reassure his Roman hosts that his own country's budget deficit wouldn't exceed those very same rules.

The European Commission rejected Italy's draft 2019 budget this week, saying it broke EU rules on public spending and asked Rome to submit a new one within three weeks or face disciplinary action.

But France's budget bill for 2019 unveiled last month has also been criticized for not being brave enough on cutting spending while targeting a deficit for 2019 at 2.8 percent, close to the 3 percent limit set by the EU's Stability and Growth Pact. In September, the International Monetary Fund estimated France's deficit will reach 3.2 percent of GDP in 2019.

Fiscal deja vu all over again

The European Commission this week told France, Spain, Belgium, Portugal and Slovenia that their 2019 budget proposals did not meet recommended targets for cutting longer-term deficit cycles.

In its letter to the French Finance Ministry the Commission wrote: "The preliminary evaluation of the Commission indicates that France's trajectory does not respect the rhythm of debt reduction in 2019," referring to eurozone rules.

The Commission was not happy about the speed and depth of French plans to cut its structural deficits. The Commission wants cuts of 0.6 percent of GDP, while Paris is targeting 0.2 percent.

Meanwhile, slow growth this year has raised doubts that France can keep reducing its budget deficit. The economy grew 0.2 percent in each of the first two quarters, less than Italy. Le Maire said this year's deficit will be 2.6 percent or 2.7 percent "depending on growth."

Paris said it expected its debt load to peak at 97 percent of GDP in 2019. By comparison, Germany's will have fallen to 58 percent.

But this is nothing new, analysts said. The critical difference is that France has much lower financing costs than Italy. "This makes a significant difference in its long-term debt dynamics," Antoine Bouvet of Mizuho International in London told DW.

There is another material difference between Italy on the one hand, and Spain and France on the other. "The latter two are more likely to be eligible for an ESM [European Stability Mechanism] precautionary program, and so for European Central Bank support to their bond markets, whereas the current Italian government is much less likely to sign up to the sort of fiscal conditionality this would entail," Bouvet said.

"The Commission has got to take the wider political economy picture into account, without seeming to give the impression that France gets special treatment because it's a major economic player and net contributor to the EU budget," Brussels-based Robin Huguenot-Noel, a researcher at the European Policy Center, said.

Macron has in fact slowed fiscal consolidation, putting off difficult spending cuts. Of the €80 billion ($98 billion) of planned savings over five years, Macron has piled the share allocated for the last two years of his term to 48 percent from what had initially been agreed at 28 percent. France is thus delaying to at least 2023 to achieve a structural deficit of 0.4 percent of GDP, as prescribed by EU rules.

France is also far from a frontrunner in building up fiscal buffers, as advised by the International Monetary Fund and the European Central Bank, to be better prepared for the next financial crisis.

"France is off budget track and Macron isn't even trying to pretend otherwise," said Francois Ecalle, head of the independent Paris-based fiscal-monitoring body Fipeco. "The government is axing taxes before spending; it's hard to see how this is going to work."

The IMF wants France to downsize its wage bill, consolidate local government budgets and reshape social, health and retirement benefits. The government says this risks street protests and argues that any more efforts on spending in 2019 would risk choking off a recovery that already looks fragile.