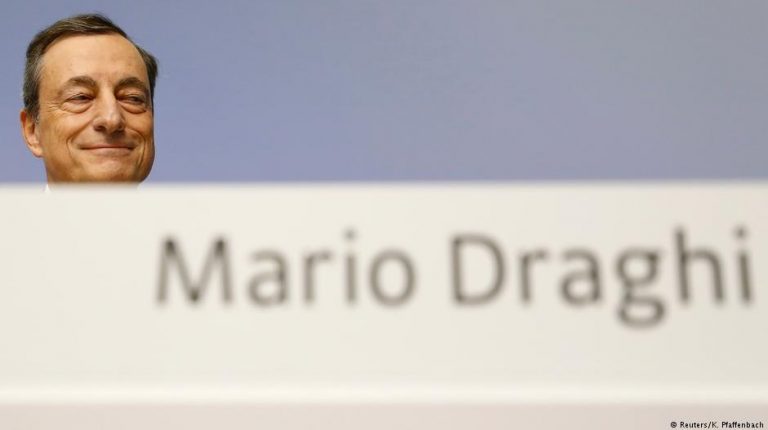 We don’t know if the rumors that Italy’s PM checks Italian-German bond yield spreads several times a day are true. But as the ECB ends stimulus and Rome refuses to budge on its budget, he might want to start.As expected, the European Central Bank (ECB) on Thursday brushed aside fears of rising inflation and slowing growth, a possible Brexit no deal and Italy’s budget issues to reaffirm it will end its 4-year €2.5 trillion ($2.85 trillion) stimulus program known as Quantative Easing (QE) at the end of the year. The bank has already halved its monthly bond purchases to €15 billion.

"Risks surrounding the eurozone growth outlook can still be assessed as broadly balanced," ECB boss Mario Draghi said. "At the same time, risks relating to protectionism, vulnerabilities in emerging markets and financial market volatility remain prominent," he went on. "Is this enough of a change to make us change the baseline scenario? The answer is 'No.'"

Draghi said at its Frankfurt HQ that the euro-zone's central bank will continue using other instruments after the bond purchase program ends, indicating that monetary policy will remain relatively loose.

An ECB statement said interest rates would, for example, stay at historic lows "at least through the summer of 2019" and maybe beyond. The ECB's 25-member governing council said it will keep its benchmark refinancing rate at zero and deposit rate at minus 0.4 percent.

This leaves the ECB behind the US Federal Reserve, which has started raising interest rates and cut its stimulus program earlier this year.

"Once QE support has gone then you will see who is swimming naked," Lars Kalbreier, the chief investment officer at Vontobel Wealth Management told Bloomberg's recent Invest Summit in London.

Some market watchers fear that Italy's public spending plans could trigger a re-emergence of the eurozone's debt crisis. With the EU rejecting Italy's budget this week, Draghi reiterated on Thursday that no individual member state can expect its help, particularly if they breach EU rules.

Italy's Finance Minister Giovanni Tria announced plans to cut Italy's budget deficit to 1.6 percent of GDP but this was rejected by 5 Star Movement leader Luigi Di Maio and the League's Matteo Salvini. They are demanding more fiscal freedom to implement policies pledged before Italy's election earlier this year. The limit was subsequently set at 2.4 percent, edging closer to the 3 percent limit set by the EU's Stability and Growth Pact.

Di Maio said recently the EU is using the Italian-German yield spread to bully Rome into line with its budget rules. "There are some European institutions which, with their statements, are playing at terrorism on the markets," he said.

Italy's debt load — currently standing at €2.3 trillion or more than 130 percent of gross domestic products (GDP) — is the highest in the European Union, and debt maturities are among the shortest. Some 27.5 percent of its debt (35.6 percent of GDP) comes due before the end of 2020, meaning that a higher interest refinancing burden could undermine growth.

Meanwhile, the yield on the 10-year Italian government bond reached the highest level on Thursday since May and its spread to German Bunds, the benchmark for the region, hit 314 basis points (bps) this week, well above the 300 bps it hit following the formation of the new populist government in Rome in the spring.

Luigi di Maio, deputy prime minister and head of the Five Star Movement, has said Rome's controversial 2019 budget would still be executed even if the spread rose to over 400 bps.

Furthermore, the so-called 'doom loop,' where the assets of domestic banks and those of the government are very closely intertwined, is strong, as the Italian banking sector owns a total of €387 billion worth of domestic sovereign debt, according to the ECB.

Salvini on Thursday ruled out Rome turning to Russia to buy its bonds if there was a surge in Italy's borrowing costs.

Read more: How will the EU-Italy budget standoff be resolved?

There may be troubles ahead

Inflation, the ECB'S primary policy goal, is following its earlier path, with prices stronger due to higher oil prices and core inflation, the ECB said in its statement.

Draghi had referred to a "vigorous" pick-up in core inflation at the ECB's September meeting and recently told the European Parliament ECB forecasts of 1.7 percent price growth between 2018 and 2020 would be met.

But a fragile exogenous environment could threaten growth in the eurozone and the bank's 2 percent target. A fall in stock market prices, unease aggravated by Brexit stasis, the US-China trade rows and signs of bubbles in areas of the global economy have dented confidence in this prediction already.

The ECB acknowledged the eurozone growth outlook was deteriorating, though said not by enough to derail its QE withdrawal. The Bundesbank's recent monthly report said German growth may have come to a halt in the third-quarter, while a composite eurozone purchasing manager's index for October dropped to 52.7 from 54.1 in September.