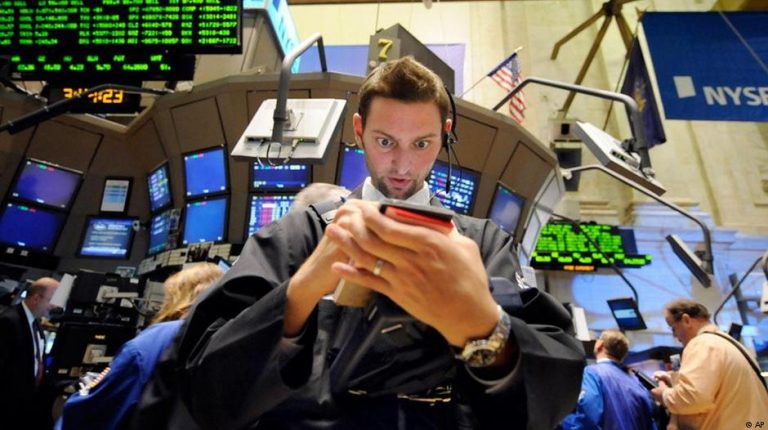 As global stock markets hit a rocky patch, many are asking if such volatility is a harbinger of worse to come or if this is just a natural market correction. DW looks at some of the key issues shaping the turbulence.Global stocks are set for their worst week in over five years, with important US benchmarks — the S&P 500 and the Dow Jones Index — having erased all of their gains for the year on Wednesday.

The leading indices in the eurozone are also down significantly. German stocks have slumped more than 13 percent in 2018, while French stocks hit a new low for the year, bringing losses to 6.77 percent. Italy is down 15.4 percent, UK equities down 9.43 percent and Chinese stocks are lower by 20 percent this year.

Read more: Learning from Lehman: Is the next crash coming?

Group psychology is everything in such situations and as Craig Erlam, senior market analyst at OANDA in London, said, "the mentality of the markets right now means that any reasons to sell are being leaped on."

But how far it will go is anyone's guess. Some on the left have been waiting for the market to fold under the weight of its own contradictions for over 150 years, after all. One thing for sure is that predictions will remain free and thus commensurate with their underlying market value.

But therein lies the rub, or perhaps rubs. Rub 1: This is unknown territory. Rub 2: Hope rather than rational argument predominates.

So, are we in the throes of a repeat of the 2008 financial crisis, as Deborah de Lange, a professor at Ryerson University, suggested recently? "The dips in stock markets just recently, together with dire predictions for early 2019, are setting off alarm bells."

Or is the stock market simply adjusting to a fast-changing world? "You look at everything going on — Saudi Arabia, the oil market, Brexit, Italy, the US elections, the Fed raising rates — I could go on and on," Brad McMillan, the chief investment officer at Commonwealth Financial Network, told The Washington Post. "The question isn't why is the market reacting. The question is why isn't it worse."

Read more: Opinion: Lehman — why we need a change of mindset

The recent sell-off has been triggered by concerns over rising US interest rates, political uncertainty in Italy, trade tensions between the US and China, crises in emerging markets and slowing economic growth in China. Throw in Brexit, the midterm US elections and the international outcry over the disappearance of journalist Jamal Khashoggi and a perfect storm could be brewing.

"One could dismiss one or two of these data points as outliers," DataTrek Research co-founder Nicholas Colas wrote in a research note this week. "But taken as a whole they clearly show global macro concerns over worldwide economic slowing and possibly a synchronized recession."

The US economy is growing strongly, with unemployment at an historic low on the back of tax cuts at the end of 2017. But this has in turn prompted the Federal Reserve to hike interest rates to cool potential inflation. Rising rates in turn mean higher borrowing costs and some investors are afraid firms and consumers will struggle to cope with less disposable income, thus undermining growth. Added to this, expectations of further rate rises have pushed up bond yields, sucking cash out of the stock market.

Read more: Opinion: Wall Street boom despite or because of Trump?

"The first, and most important worry is that Fed tightening and fading fiscal stimulus will cause the US economy to take a turn for the worse," analysts at Capital Economics said in a note to clients this week. "As we have been arguing for a while now, these worries are likely to get worse over the next twelve months or so."

Amazon, Bank of America, Nvidia, Twitter, and Alphabet (Google's parent company) — all fell this week and the yields on US Treasuries (bonds) were also down as investors piled out of stocks and into the safety of government bonds.

The dollar is another concern. The greenback has been strengthening as interest rates suck capital in US bonds, with little or nothing to do with confidence in the US economy, and could also add to the recent equity woes.

Fears that a slowdown in China's economy will hit the rest of the world were also playing out this week. The Shanghai Composite has lost 27 percent of its value since hitting a peak in January.

China's GDP grew 6.5 percent from a year earlier in the third quarter, down from 6.7 percent, China's slowest rate of growth in a decade. Beijing has been preparing monetary and fiscal stimulus to help support its economy and its stock market, the central bank cutting the reserve requirement for banks to pump around $100 billion into the economy.

Observers are also seeing signs of contagion via commodity markets from the second-largest economy in the world and a big importer of metals, crude oil and other raw materials.

The weakness in the Chinese currency, the yuan, also means demand for dollar-denominated commodities from China have been affected. Lower Chinese stock markets has also reduced purchasing power in China.

Washington imposed new tariffs in September on $200 billion (€174 billion) of Chinese goods, hitting thousands of consumer goods. Beijing retaliated with extra duties on $60 billion of US goods and Trump has threatened further tariffs on an additional $276 billion of goods. This could threaten the country's large export industries.

The International Monetary Fund has warned that the US's protectionist trade policies will damage global growth.

3M and Caterpillar — two major industrial players on US stock markets — said this week their China sales were slowing and warned that US tariffs would drive up their operating costs by about $100 million each in 2019. Caterpillar said it would have to raise its prices thanks to Trump's tariffs on steel and aluminum.

Emerging market stocks fell for the their fifth weekly fall in a row on Friday. The Russian rouble was steady, but Turkey's lira and stocks weakened, while eyes are on how Brazil and Argentina cope with economic difficulties.

European stocks are also being dragged down by the row between Rome and Brussels over Italy's new budget. The populist government in Rome wants to raise public spending to revive the economy but this would lead to a higher deficit in a country where the debt pile is already huge.

The European Central Bank President Mario Draghi said the bank's €2.6 trillion asset purchase program would end this year and interest rates might rise after next summer, despite fears about the monetary union's economic and political future.

A well-known journalist and critic of the Saudi Arabian government was killed in the country's Turkey consulate by agents of the regime, sparking a massive international outcry. The question is how will Western business pulling out of doing business with Riyadh impact oil prices and global investment.