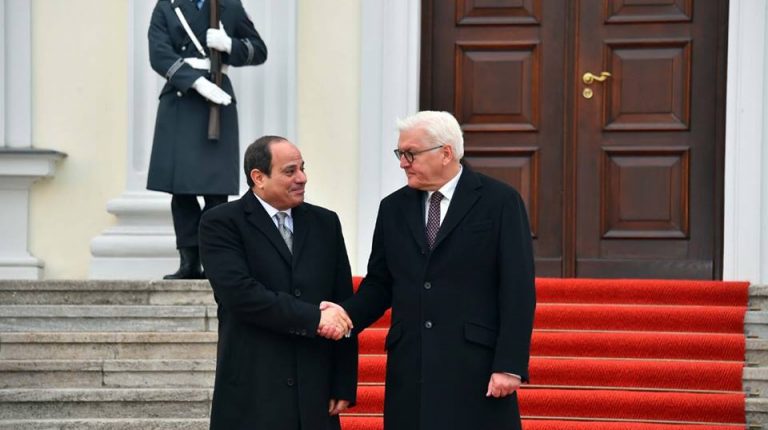 Egypt President Abdel Fattah Al-Sisi on Monday met his German counterpart Frank-Walter Steinmeier and the President of the Bundestag, Wolfgang Schäuble as well as other top German officials.

The two leaders and officials addressed enhancing bilateral economic cooperation and increasing German investments as well as the amount of trade exchange.

International and regional issues of common interest were also on the discussion table.

During Al-Sisi’s visit to the Bundestag, Schäuble expressed his support towards the efforts of the Egyptian President in curbing illegal immigration and combating extremism. He stressed the importance of a united stance from the international community to eliminate extremist thoughts, as well as terrorism.

On the economic front, the president met with Minister for Economic Affairs and Energy Peter Altmaier, and the Development Minister Gerd Müller, as well as a delegation of German companies.

During the meeting Al-Sisi showcased Egypt’s economic reforms undertaken, and that the country is looking forward to an increased volume of German investments.

Earlier on Sunday, Al-Sisi met Wolfgang Ischinger, the chairperson of Munich Security Conference (MSC) in Berlin. During the meeting, Al-Sisi asserted Egypt’s readiness to take part in the MSC, and showcase the country’s vision to reach political solutions for the distinct crisis in the Middle East and Africa.

Meanwhile, Al-Sisi also met a delegation of the Bundestag headed by Peter Ramsauer, head of economic and developmental cooperation committee.

The Egyptian President emphasised the significance of Germany as an economic partner to Egypt, being Germany’s third largest commercial partner in the Middle East.

Al-Sisi headed to Germany on Sunday on a four-day visit to take part in the G20 Compact with Africa.

Al-Sisi is scheduled to meet the German Chancellor Angela Merkel to discuss enhancing bilateral cooperation and strengthening ties between the two countries, according to Ulrike Demmer, deputy spokesperson for the German Executive.

Demmer said that Al-Sisi and Merkel will address bolstering cooperation, international and regional issues of common interest, countering terrorism in the region, and eliminating illegal immigration.