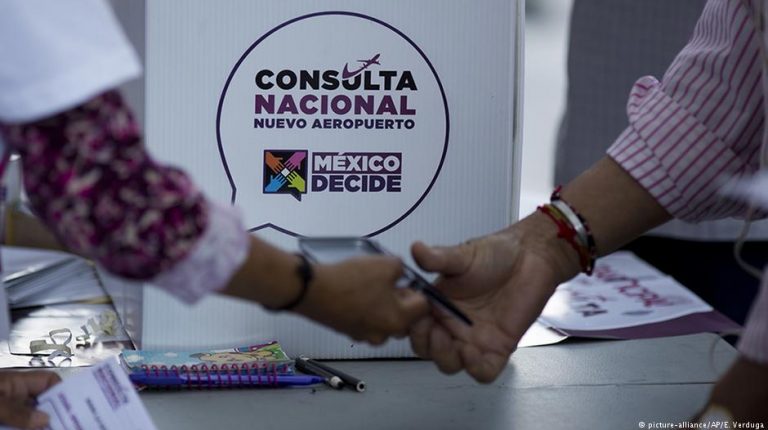 Incoming leftist President-elect Andres Manuel Lopez Obrador is stopping a new airport for Mexico City, which he had called “a waste of taxpayers’ money” and which was voted down by Mexicans in a referendum.In a referendum on Sunday, Mexicans were asked to answer the following question: "Given the saturation of Mexico City International Airport, which option do you consider to be the best for the country?" Two choices were given:

A. Repurposing the Santa Lucia military base, a plan that would also mean renovating the current airport and one in neighboring Toluca.

B. Continuing to build the new one and abandoning the old one.

Andres Manuel Lopez Obrador, who succeeds Enrique Pena Nieto as Mexico's president on December 1, said in a message published ahead of the poll that the result would be respected by his government.

"The many citizens who are participating are helping me, so that the decision does not rest with just one man, no matter how important it is," he added.

The winning option, favored by Obrador, is a plan to recondition the existing, overburdened Mexico City airport by adding two runways to the Santa Lucía military airport and improving the airport in the city of Toluca. It has been widely criticized by the private sector, which during four days of consultations with Obrador last week said the new terminal was needed to ease mounting problems at the current airport.

Mexican billionaire businessman Carlos Slim is the main investor in the new airport, and his construction company CICSA was awarded the $ 4.7-billion contract to build the airport's terminal in a consortium with six other companies. "Canceling the project would amount to canceling the economic growth of the country," Slim said in April, when news of a referendum first emerged.

Investors have also expressed alarm that scrapping the project could signal a lack of respect by the incoming president for Mexico's long-term financial commitments.

Contractors have committed about 120 billion pesos ($8.8 billion, €5.6 billion) to the new airport and spent some 60 billion pesos so far, according to the state-controlled airport company GACM. In addition, $9 billion in bonds and $1.6 billion in a real estate investment trust have been issued, meaning the new government could find itself having to sell fresh debt to repay bonds, on top of paying compensation.

Mexico City's new airport, to be built on the site of a dry lake where the capital of the Aztecs was once situated, has been beset by problems. Designed by British star architect Sir Norman Foster, it has been held up by construction delays and charges of massive corruption.

At least 20 percent finished, thousands of tones of concrete have already been sunk into its foundations.

At the same time, environmentalists are criticizing the project as "ecocide" because it endangers the nearby habitat of flocks of geese and other migratory birds. Moreover, there are concerns for the airport's hydrological consequences as the site is reportedly sinking 40 centimeters (15.7 inches) a year, requiring complex engineering.

However, the winning option would have massive implications, too. The Mexican College of Civil Engineers, for example, calculated that reconditioning the Santa Lucia airbase and renovating Mexico City's existing airport would cost 66 percent more than completing the new airport.