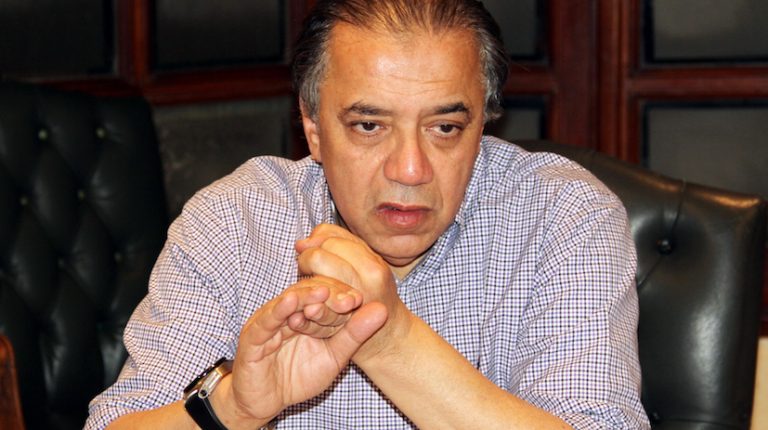 New mega petrochemical projects will be launched in the coming period that will create an upswing in the sector, including a project for Phosphate Misr Company, according to Chairperson of the Chamber of Chemical Industries at the Federation of Egyptian Industries (FEI), Sherif El-Gabaly.

El-Gabaly sat down for an interview with Daily News Egypt to discus the latest industry developments, the transcript for which is below, lightly edited for clarity:

First of all El-Gabaly revealed the establishment of a joint venture between Phosphate Misr—proprietor of Abu Tartour Phosphate project— and Abu Qir Fertilisers Company is underway, with total  investments ranging between $500 and 600m. The project includes phosphoric acid production units in its first phase.

“The second project, which is under review, is for Delta Company for Fertilisers and Chemical Industries. The project includes two production lines for ammonia with an annual capacity of 396,000 tonnes, and a urea production line of 650,000 tonnes per year,” El-Gabaly disclosed.

In addition, he explained that the petrochemical industry’s development leads to the downstream manufacturing industries’ development for fibre, plastic, and other related industries.

Furthermore, Aromatics Complex project to produce paraxylene will soon be launched with an annual production capacity of 350,000 tonnes, in addition to producing gasoline with a capacity of 300,000 tonnes per, according to El-Gabaly.

He elaborated that one of the important projects is Naphtha Refinery-Integrated Petrochemical Complex for the production of ethylene, propylene and potadine and their compounds, as well as benzene and xylene.

Likewise, El-Gabaly noted further that the Double Complex for Olefins project will be set up for the production of ethylene, monoethylene glycol, and polyethene terephthalate PET, with a total annual production capacity of 600,000 tonnes.

Regarding the impact of the government’s decision to increase the price of gasoline in June, El-Gabaly said that the impact of the fuel price increase has not yet resonated in the chemicals industry, as it takes time to affect production inputs. However, this increase could have an impact on the transport sector, which increased by about 20%.

He explained that the impact of the increase may appear three months after the government’s decision to raise gasoline prices.

He denied access to 100% Egyptian products, as this never occurred anywhere in the world, stressing that the chemicals industry is one of the most widely-used industries for local components, noting that local components are sufficient in most chemical industries.

License for industrial establishments’ law, one of most important legislative reforms

El-Gabaly said that one of the most important legislative reforms that took place in the last period in favour of the Egyptian industry, especially the chemical industry, is the issuance of Law 15 of 2017, which of facilitates the procedures for licensing industrial establishments.

In May 2017, former Minister of Trade and Industry Tarek Kabil issued a law to simplify industrial licensing procedures, and to facilitate procedures for obtaining approvals and industrial licenses, operating licenses as well as overcoming bureaucracy. The law provides a reduction in the licence receival period from 634 days to only seven days for low-risk industries, and 30 days for high-risk industries.

Into the bargain, El-Gabaly added that there are several other complementary laws required for the development of the industrial system, including the Labour Law and the Mineral Resources Law.

He announced that a number of joint proposals between the Chamber of Chemical Industries and the Chamber of Mining Industries will be presented to parliament in the event they discuss the Mineral Resources Law.

He maintained that the lack of industrial lands which are connected to services and utilities is also a problem facing other industries in general, not just the chemicals industry, as well as stumbling factories.

“Likewise, some chemical industries suffer from high gasoline prices, such as basic chemical industries, glass, and highly-priced raw materials. However, the Industrial Development Agency is working seriously on developing available employment within the next three years,” he explained, adding, “problems related to customs clearance of paint factories are being solved.”

With regard to the African market, he said it is a very promising market, but there are a number of issues to be worked on. The first is the Egyptian presence in these markets, such as presence during visits or the presence of Egyptian companies in African markets as well as participation in exhibitions and opening new branches.

With that, he stressed the FEI’s interest to send promotional missions to open new African markets, imparting that a delegation of 10 companies visited Rwanda, and that a few FEI members met with a Ugandan delegation.

A visit to Tanzania is scheduled in early November, with at least 30 companies anticipated to participate in the Egyptian delegation to Tanzania, he mentioned.

One of the government’s incentives was to provide 50% support for shipping costs to Africa, while the Export Development Authority would provide some logistical incentives to African countries’ promotional missions, he divulged.

Upper Egypt is very promising in terms of chemical industries, due to the availability of the industry’s most raw materials in that area, according to El-Gabaly.

On the production of chemical and petrochemical industries, the chairperson of the Chamber of Chemical Industries said that Egypt has great potential to promote its chemical industries. In fact, the chemical industry sector is a promising sector for foreign and Arab direct investments in Egypt in the next 10 years, and they clearly indicated that in the master plan of the Holding Company for Pharmaceuticals.

He unveiled that the total production of chemical and petrochemical industries reached $40.13bn in 2017.

The number of companies registered in the Chamber of Chemical Industries according to industrial activity is 6,559—460 of which are in the paper and cardboard sector, 513 are in the detergent sector, 689 are in the paint sector, 1,410 are in miscellaneous chemicals and fertilisers sector, 3246 are in plastics, rubber and petrochemicals sector, and 241 in waste recycling sector.

On the geographical distribution of the member companies for 2018, Sharkya ranked first with 1,119 companies, followed by Qalyubia with 1,058 companies, Giza with 965 companies, Alexandria with 815 companies, and Cairo with 751 companies.

The Red Sea governorate has only five companies. New Valley, Matrouh, and North Sinai each have three companies, while South Sinai has only one company.