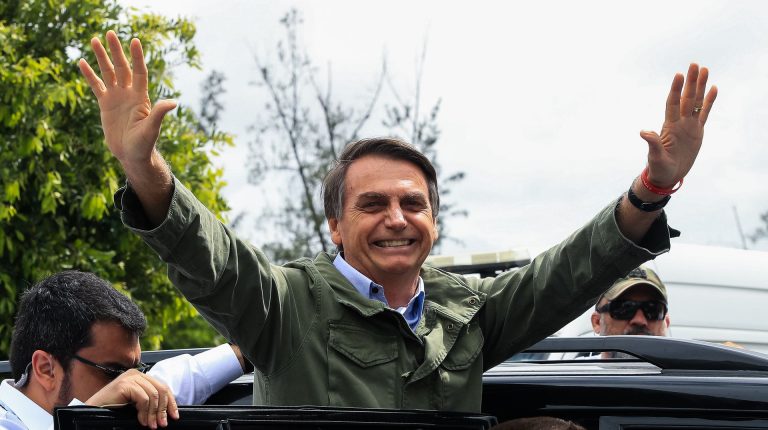 Amid concerns of rising radical far-righters, former army officer Jair Bolsonaro won the second round of Brazil’s presidential elections, obtaining 55.1% of the vote, with 99% of the ballots counted.

His leftist challenger, Fernando Haddad, from the worker’s party, was far behind him with 44.9%.

Bolsonaro’s win signifies a sharp ideological right-turn for the South American nation, and adds another right-leaning government to the region.

“The president-elect has campaigned with an openly anti-human-rights agenda, and frequently made discriminatory statements about different groups of society,” Erika Guevara-Rosas, Americas director at Amnesty International said in a statement.

The last voting days of the elections were conducted without reports of violence.

However, Bolsonaro’s supporters gathered in front of his home in the neighbourhood of Barra da Tijuca in Rio de Janeiro, shortly after results were announced, waving Brazilian flags and setting off fireworks in celebration.

This election had been marked by high polarisation, and voter anger, over the rampant crime that plagues Brazil, and the mammoth corruption scandal which has enveloped the nation.

Haddad’s Workers Party was implicated in this corruption probe, which led to the jailing of former president Luiz Inacio Lula da Silva. Despite the strong result for the far right at the national level, left-leaning parties dominated the governor’s races, winning 14 out of the 27 states. The Workers Party won four governorships in the northern part of the country, which is also the poorest. It was the most governorships won by any party.

Bolsonaro, who has served in the Brazilian Congress, was able to tap into voter discontent by campaigning as the anti-corruption candidate, with a tough-on-crime platform.

But the 63-year-old congressman, who was dubbed ‘Brazil’s Donald Trump,’ or ‘Tropical Trump,’ was widely criticised for his stances against gay people, sexist comments about women, racist comments about Brazil’s black population, and his praise for the country’s 1964-85 military dictatorship.

In a victory speech, Bolsonaro said he never had doubts about winning and thanked God, noting an assassination attempt he suffered during the campaign trail. “We cannot continue flirting with communism,” Bolosonaro said. “We are going to change the destiny of Brazil,” he vowed.

Bolsonaro’s campaign promises include easing gun control laws, and granting prior authorisation for law enforcement officials to kill. Amnesty International said that if such proposals are adopted, “it would worsen the already dire context of lethal violence in Brazil, where there are 63,000 homicides each year, more than 70% of them from firearms, and police commit approximately 5,000 homicides a year, many of which are indeed extrajudicial executions.”

However, the former army captain said he would defend “the constitution, democracy and freedom,” adding that “this is not the promise of a party, nor the word of a man. It is an oath before God.”

“With the electoral process now over, we all face the challenge of protecting human rights for everyone in Brazil. Amnesty International will stand alongside social movements, NGOs, activists and all those who defend human rights to ensure that Brazil’s future brings more rights and less repression,” Erika Guevara-Rosas said.

According to several human rights organisations, Brazil has one of the highest rates of killings human rights defenders and activists in the world, with dozens killed every year for defending rights that should be guaranteed by the state. Critics say that the president-elect’s statements about putting an end to activism and clamping down on organised social movements presents a very likely risk to the rights of freedom of expression, and peaceful assembly guaranteed by national and international law.

“Brazil’s public institutions must take firm and decisive action, to protect human rights and all those who defend and mobilise for rights in the country. These institutions have a key role to play in protecting the rule of law, and preventing the proposals from materialising,” Erika Guevara-Rosas said.