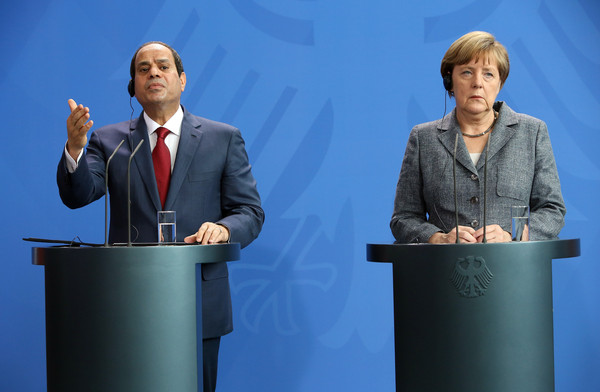 President Abdel Fattah Al-Sisi expressed Egypt’s admiration for Germany’s achievements to support refugees, through hosting them and opening doors for them, during a summit with German Chancellor Angela Merkel on Tuesday.

The summit, which marks the sixth between both leaders, came to strengthen bilateral relations, and strategic partnership between Egypt and Germany, and build upon what has been achieved in this area during the past four years.

Al-Sisi said that the relations between Egypt and Germany represent a diverse partnership, and that the continuous cooperation between the two countries confirms the strength of those relations.

He praised the development of the bilateral relations between Egypt and Germany, where he emphasised the international efforts to fight terrorism, highlighting that several German companies have contributed in major national projects currently undertaken by Egypt.

During the joint press conference, Al-Sisi expressed his happiness with the increased German tourism in Egypt, which he says is returning to its previous levels.

The summit included discussion over issues of common interest and regional issues, especially the situation in Syria, Libya, Yemen, and efforts to combat terrorism and illegal immigration.

The leaders also discussed means of boosting bilateral cooperation between Cairo and Berlin in various political, economic, trade, investment and other fields.

The two sides discussed ways to improve cooperation between the two countries in order to deal with the crisis of the flow of refugees and illegal immigrants, terrorism and extremism, which represent a common threat and seek to impede the development process and spread hatred and violence.

As for German Chancellor, she stated that she aims to find solutions with Egypt for the problems facing the  Middle East and assisting in spreading peace in the region, noting that Germany is looking carefully at the Middle East peace process.

Merkel also said she spoke with Al-Sisi about the situation in Gaza, and agreed on the importance of reaching a mutually satisfactory solution.

She stressed that Germany seeks to develop women’s empowerment, noting that Germany achieve more for women in the world.

Al-Sisi headed to Germany on Sunday on a four-day visit to take part in the G20 Compact with Africa (CwA).

The CwA was launched in 2017, and is initiated under the German G20 Presidency to promote private investments in Africa.