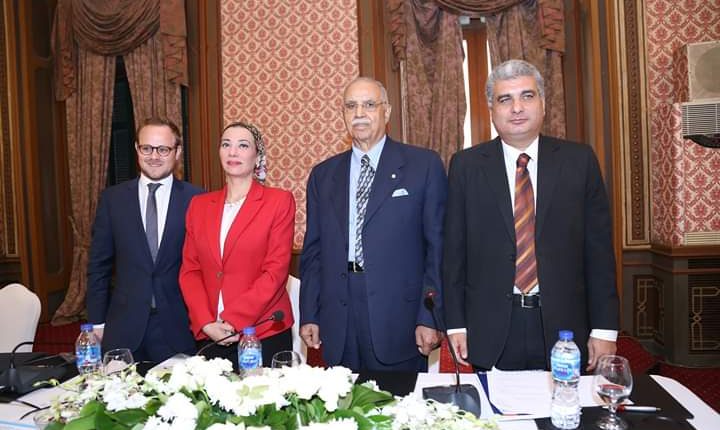 The Friedrich Ebert Foundation has concluded its ‘Sustainable Transport in Egypt’ conference entitled ‘Cleaner Mobility and the Advent of Electric Vehicles’.

The conference was held in cooperation with the Ministry of Environment, the Centre For Environment & Development For The Arab Region & Europe (Cedare), the UNDP facility, and the Egyptian Environmental Affairs Agency (EEAA) on 24 and 25 October. The conference discussed means of using clean energy in the transport sector, policies and legislations, and providing infrastructure to rely on electric vehicles throughout Egypt.

The conference was attended by Environment Minister Yasmin Fouad; Representative for Egypt’s Friedrich-Ebert-Stiftung Country Office Richard Probst; Regional Director of the sustainable growth sector at CEDARE Hossam Allam; Representative of the New Administrative Capital on behalf of Ahmed Zaki Abdin, Mahmady Eid; Chairperson of the New Administrative Capital; Representative of the UNEP  Alexandre Corner; a Jordanian delegation to present its transformation experience into electric vehicles; several Egyptian and international experts in the field of electric mobility and sustainable transport, and a few Egyptian automotive company representatives.

During the conference, Minister of Environment Yasmine Fouad explained that the ministry began seven years ago to coordinate with international and local partners to plan for electric vehicle-based sustainable transport, given its major role in reducing harmful emissions, provide a clean environment, green economy and improve life quality.

She added that it goes beyond importing electric vehicles, up to to implementing a comprehensive operation system. Currently, the Environment Ministry is working to expand sustainable transportation projects to save fuel consumption in the sector in Egypt and improve the environment.

Furthermore, Fouad is also cooperating with several local and international partners as well as with university students, to utilise their potential and projects in serving sustainable transport. The minister hopes that Egypt be successful in reducing harmful emissions within Egypt’s 2030 Sustainable Development Plan.

Additionally, the environment minister praised the conference because it is a real opportunity to exchange experiences on how electric vehicles and infrastructure are needed in different countries by presenting a research paper on the general status of electric vehicles in Egypt, as well as the case study of Jordan, and overviews of China and Germany.

Richard Probst, the Friedrich-Ebert-Stiftung representative, urged the need for a community dialogue with all stakeholders at all industry levels, including trade and environment, as well as strengthening local and international companies based on the Green Economy Roadmap for the UN, which heavily relies on innovative change in the transport sector, and shifting towards sustainable transport.

Egypt has the potential to become an industry focal point, and a trading centre for electric vehicles, indicated Probst, noting that electric vehicles are one of the most prominent pillars which can have a permanent positive impact on the community’s economic indicators.

He also stressed the need to exchange experiences on how to trade electric vehicles and the necessary infrastructure in different countries.

He also expressed great pleasure in the Egyptian government’s attempt to transform according to sustainable transport, based on the use of electric vehicles, in addition to the presence of local dealers and agents of local cars convinced of the need to move towards electric vehicles, and whom have recently  already started introducing models in the local market.

The Capital allocated only 25,000 feddan for roads, which is 15% of the total area, so that the width of each road will range from 240m to 40m, to keep the environment clean, and ensure low carbon combustion, stressed Eid.

The New Capital also includes green areas on 22,000 feddan, in addition to an 8,000 feddan green river which will produce oxygen and eliminate carbon emissions.

Hossam Allam, CEDARE representative, said that the debate about introducing means of electrical transportation in the Arab region started two years ago, especially in Egypt, pointing out that cars are a small part of what Egypt can unlock in terms of substitutable development, and what they contribute to economic and social development.

During his speech at the conference, Allam said that Egypt is qualified to become a station and a centre for electric car manufacturing, especially in the SCZone, which can become the most important areas in the world for electric vehicle manufacturing, given that Egypt has important international agreements, such as COMESA and Agadir, pointing out that there were countries who have applied similar experiences, such as Morocco five years ago, which has now become a manufacturing hub.

Allam also highlighted that besides in addition to the negative impacts of traditional fuel, it also consumes government subsidies, which costs the state billions annually, mentioning that fuel is less efficient than electricity for motor vehicles.

Furthermore, he declared CEDARE’s commitment to develop a strategic plan, in cooperation with the concerned authorities and research centres, to identify the roles and policies and build an institutional framework in order to achieve the desired objectives of sustainable transport, and the distribution of electric vehicles.

Alexander Corner, representative of the Air and Navigation Unit at UNEP, presented an e-Mob draft to enable the use of electric vehicles in developing countries, in cooperation with the Global Environment Facility, which focuses on the local potential of these countries for electric vehicles, through the infrastructure and local electric transmission project, which is working to rehabilitate 30 countries worldwide.

In Addition, he recommended developing a special version of the national project of electric transport in Egypt.

Ahmed El-Dorghami, Environmental and Energy Expert at CEDARE, presented several studies on the damage of all environment aspects in Egypt due to transport pollution, especially in overcrowded cities such as Cairo, stressing the importance of transforming to electric vehicles to preserve Egyptian lives.

He pointed out that 95% passenger cars are spent on parking, hinting at the need to increase reliance on electric public transportation to serve the sustainable development goals in Egypt.

The government exempted electric cars from customs, while other electric vehicles are subject to 40% in customs, which hinders sustainable development operations, and Dorghami urged the government to reconsider this, adding that the existence of a city to scrap old cars is necessary, as they are the most prominent reason of pollution.

In addition, there is concern about the laws and policies related to electric vehicles, especially licenses, so it is necessary to develop an integrated general strategy for electric transport in Egypt, concluded Dorghami.

‘Development is weapon against terrorism, poverty, disease,’ Al-Sisi from China