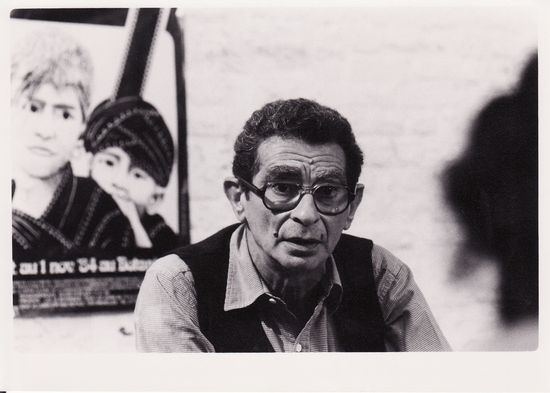 Starting 14th of November, Cinémathèque Française will organise a long retrospective to honour the legacy of Arab Cinema’s renowned director, Youssef Chahine, to be screened in France.

Youssef Chahine, one of the most outstanding directors of Egyptian cinema, is credited with introducing Egyptian Cinema to the world. He has managed to make the local films transcend national borders.

Trained in the US and a long-time Hollywood fan, Chahine returned home in 1948, drawing from the popular melodramas at the time, but also injecting a note of social realism.

While Chahine is well-known worldwide, and in 1997 was awarded the Cannes Film Festival’s 50th anniversary Lifetime Achievement Award, his relations with the Egyptian authorities have often been difficult.

His 1958 film Bab El-Hadid (Cairo Station), among others, will be screened to the French audience.

Last May, the classics section of the Cannes Film Festival screened the masterpiece of Egyptian director El-Massir.

He has, deservedly, won a number of prestigious awards among which are: ‘the Golden Tanit’ at the Carthage Film Festival, ‘the Choice (El Ikhtiyâr)’ in 1970, the Berlin Grand Jury Prize for ‘Alexandria, why? (Iskandariyyah lîh)’ in 1978.

He was also awarded three doctorates. The first, from Paris VIII University in 1997, the second, from the American University in Cairo in 2002, and the third, from Marseille Summer University in 2002. He has also been decorated 12 times with the order of the Commander of the Arts and Letters by Egypt, Tunisia, Lebanon, and France.