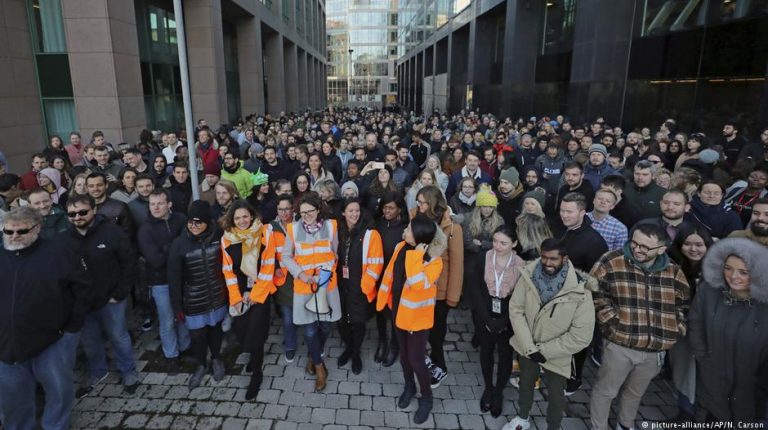 Thousands of workers around the world walked away from their desks to protest the company’s handling of sexual misconduct and equality issues. They also called for equal pay and an end to forced arbitration.Thousands of Google workers walked out of offices across the world on Thursday in protest of how the company handles sexual harassment. Employees in the Tokyo, Singapore, Berlin, London, Dublin and New York offices have already taken part, with California expected to follow suit.

Google is facing an internal backlash after the New York Times (NYT) reported last week that Android software creator Andy Rubin was paid a $90 million (€79 million) severance package in 2014 after being accused of sexual misconduct.

Both Google and Rubin have refuted this claim. The tech giant told the NYT that it had fired 48 people for sexual harassment since 2016, and none of them had been given an exit package.

Google chief executive Sundar Pichai issued an apology on Tuesday, e-mailing employees that he was "deeply sorry for the past actions and the pain they have caused employees." The next day, Google's parent company Alphabet confirmed that Richard DeVaul, an executive accused of sexual harassment, had been fired without severance.

But employees were not placated, and issued a list of demands during the Thursday walkout. They are asking Google for a concrete commitment to ending pay inequality, a clearer process for reporting sexual misconduct, and an end to forced arbitration in cases of harassment or discrimination, a standard practice across many industries designed to force such disputes to be settled privately through a binding arbitration process, rather than in courts.

Hundreds of Google employees in New York staged a rally in a park near the company's offices:

Some employees have also accused Google of claiming to be a champion of diversity and equality, while failing to take any concrete steps towards comprehensive inclusion.