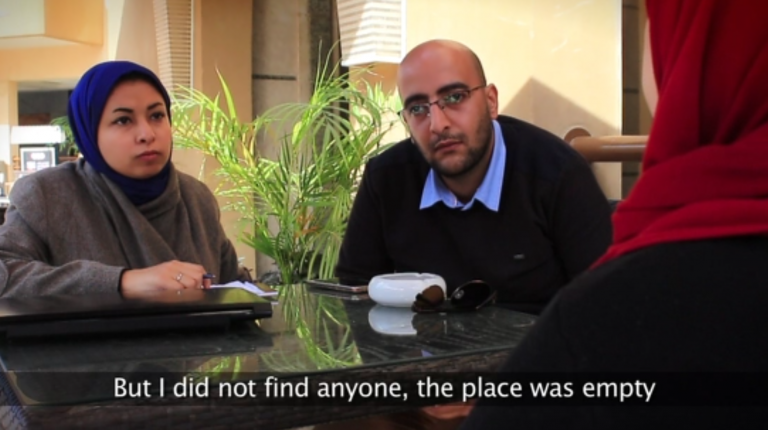 During the extensive sexual harassment cases which have been recently witnessed internationally, not only in Egypt, a married couple, Yahya Sakr and Noha Lamloum, who are both journalists and also work partners, started thinking of producing a short documentary film about sexual harassment especially in the workplace,  and particularly in the journalism career.

They named the film “Aman Mafkoud,” meaning “Missing Safety,” which they abbreviated to “Insecure”, presenting true stories of female journalists who were harassed at their workplace.

The film’s director and producer, Sakr, informed to Daily News Egypt that film’s idea came while he was discussing with his wife the issue of sexual harassment at the workplace, and the possibility of documenting the stories of females that were exposed to it, and how it affected them.

“Then I thought about producing a short documentary film about female journalists who were harassed at work, especially since I heard several stories from colleagues in the journalism field, who decides to resign, or moved from one institute to another, or who left the press field entirely after being sexually harassed due to their fear of exposure or scandal, although they are the victims and not guilty of anything,” Sakr narrated.

“Notably, the press shapes public opinion, so we cannot ask female journalists to provide insights, write news pieces and topics, in addition to working on women’s issues, while on the other hand they are being harassed themselves,” he exclaimed.

The film aims to give sexual harassment victims the opportunity to talk, and overcome their silence, Sakr explained.

He further elaborated that when the #MeToo hash tag came out, he learned that the time is right to start working on the film, as the whole world is talking about sexual harassment, so victims may be encouraged to go public and beat their silence.

In that context, Sakr noted that all the stories in the film are true, and that the film was shot with female journalists who still practice journalism, pointing out that there was only one case who left the field.

The film took nine months of work, ranging from research, surveying, persuading the cases to participate, shooting then editing, hence it was difficult because the film was an independent personal production, remarked Sakr.

Regarding the challenges that Sakr and Lamloum faced during the film’s preparation, Lamloum stated that the most important obstacle was persuading the victims to appear in front of the camera, and reveal their incidents without shame, or dreading societal repercussions.

Furthermore Sakr elaborated that many refused to participate, while others asked that their identity be hidden, noting that the film’s credibility is associated to the number of participants who exhibited their faces, pointing out that three cases took part with their facial features showing, and only two requested anonymity.

Talking about solution to end this bad phenomenon, Sakr stated that there is a need for a safe environment for the press, through having cameras in the news room, also although having an open new rooms instead of a closed ones, in addition to that it is necessary for the female journalists to have more awareness about sexual harassment and to go public, noting that Egypt has a deterrent harassment law, hence when the journalists announced the accident, this announcement will be a deterrent to the harassers.

“I hope to find a committee within the syndicate of journalists that would be competent in gender and listen to the complaints of female journalists and seek to solve them,” he asserted.

Pakistan’s first transgender anchor: ‘I struggled a lot to be accepted’