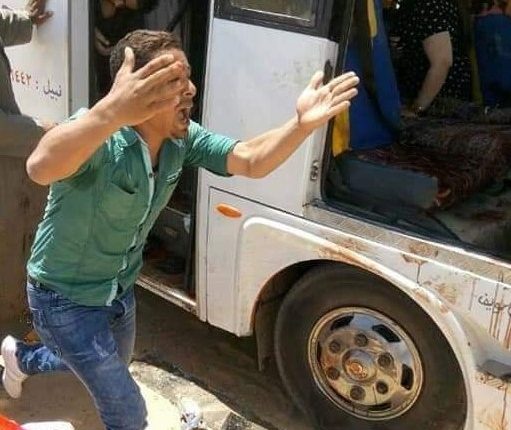 At least seven Coptic Christians were killed on Friday while over 13 others were injured in a terrorist attack against a bus which was heading to a monastery in Al-Minya governorate in Upper Egypt, according to a statement from the Coptic Orthodox Church.

According the statement, the assault which took place Friday noon, targeted three vehicles on the path which leads to the St. Samuel Coptic Christian monastery in the Al-Qalamoun mountains within Maghagha city.

The injured are currently receiving medical care in Maghagha hospitals, read the statement.

A further six individuals were also injured in the third vehicle, which was carrying 28 people who all belonged to same family, from the Al Kawamel Bahari village, Sohag city. Two of those wounded are in critical condition. They are receiving medical care in the Sheikh Zayed hospital, while the other four are being treated in Minya hospitals.

On this score, President Abdel Fattah Al-Sisi expressed his deep sorrow concerning the incident, and sent condolence messages to the victims’ families. Furthermore, he pledged to defeat terrorism in the country.

Islamic State group (IS) claimed responsibility for the attack on a bus transporting Coptic Christians in Minya.

Friday’s attack was not the first which targeted the monastery. In March 2017, over 30 people were killed, and a dozen others were wounded, when terrorists attacked a vehicle carrying Christians who were on their way to the monastery.

However, in that particular 2017 assault case, the Islamic State group claimed responsibility for it.