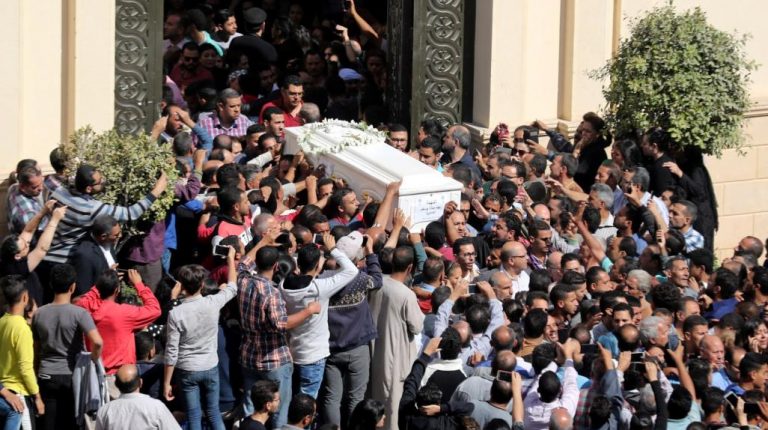 Hundreds of Egyptian Coptic Christians gathered on Saturday to attend the funeral service of seven people killed in the terrorist attack against buses carrying Copts in Upper Egypt’s Minya Governorate.

The funeral was held at Al-Amir Tadros church in Minya amid tight security presence, and in attendance of the city’s top bishops.

Minya Bishop Makarios headed the delegation which prayed over the martyrs.

The third bus was the only one forced to stop, resulting in the death of seven passengers. Six of those killed, including a boy and a girl, are all members of the same family, and the seventh is the bus driver, according to the Coptic Orthodox Church. A photo was published showing all the family members together including the victims.

The other two buses managed to escape, however, twelve of its injured passengers are currently receiving medical treatment at the Sheikh Zayed hospital. They were initially sent to Maghahga Hospital which was closer to the scene of the attack.

Wali said that an amount of EGP 100,000 will provided as a compensation for all deceased families, and also ordered an amount of EGP 50,000 for serious injuries, and EGP 2,000 for all those who sustained minor injuries.

Shortly after the attack, General Prosecutor Nabil Sadek ordered members of northern Minya’s prosecution and members of the State Security Prosecution to the site to investigate the attack, and to visit the injured victims to hear their testimonies. Security forces are currently searching for the unknown gunmen who carried out the terror attack.

Egypt’s President Abdel-Fattah Al-Sisi mourned the victims, vowing to continue the war against terrorism, according to a statement on his official Facebook account.

“I mourn with deep sorrow the martyrs who were killed today by treacherous hands which aim to undermine the firm fabric of the nation, and I wish a speedy recovery for the injured,” Al-Sisi said, confirming the state’s determination to continue its efforts to combat terrorism.

The president also called the head of the Coptic Orthodox Church Pope Tawadros II and expressed his sincere condolences for the victims of the terrorist attack.

The so-called Islamic State group claimed responsibility for the attack amid previous threats of targeting Copts in Egypt.

The attack is an addition to a series of terrorist operations targeting Copts in Egyptian churches under all regimes, leaving dozens killed.

Friday’s attack took place almost at the exact location where 28 Christians were killed when unidentified gunmen opened fire on a bus carrying Coptic citizens on their way from Beni Suef to Saint Samuel Monastery in El-Adwa City, Minya. IS also claimed responsibility for this attack.