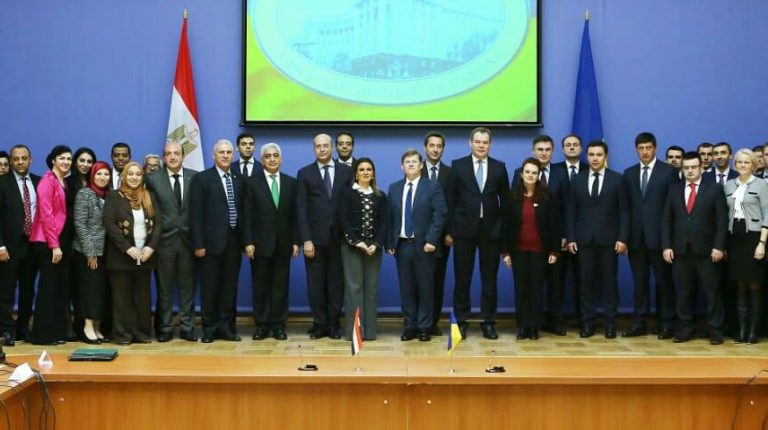 Egypt’s Minister of Investment and International Cooperation, Sahar Nasr, signed with the CEO of the Ukrainian Sea Ports Authority (USPA)  Raivis Veckagans, two maritime MoUs between the Ukrainian Odessa port and Alexandria and Egypt’s  Damietta Port, during the course of the seventh session of the Egyptian-Ukrainian Joint Committee on Economic, Scientific, and Technical Cooperation.

Nasr also signed a protocol for the committee’s works with Vice Prime Minister of Ukraine Pavlo Rozenko, according to a Saturday’ ministerial statement, noting that the meeting was held in Kiev and co-chaired by Nasr from Egypt and Rozenko from the Ukraine.

The meeting was held in the presence of several representatives of Egyptian ministries including Trade and Industry, Tourism, Military Production, Transport, Civil Aviation, Finance, Higher Education and Research, Ministry of Public Enterprise sector.

The meeting’s attendees agreed on boosting bilateral cooperation in all spheres with a particular focus on Ukraine’s investments in Egypt, said the statement, adding that there are 130 Ukrainian firms operating in Egypt which do not correspond to the amicable relations between both countries.

Increasing Ukrainian tourists to Egypt was one of the important issues which was discussed, added the statement, noting that 800,000 Ukrainians tourists visited Egypt in 2017 while 2018 is expected to witness an increase of the Ukrainian tourist numbers.

Trade exchange between Egypt and Ukraine reached $2.3bn in 2017 while both countries discussed boosting Egypt’s exports to Ukraine, mentioned the statement.

Nasr ensured Egypt’s enthusiasm to strengthen bilateral relation with Ukraine, which is based on historical roots and deep strategic partnership, adding, “the current meeting comes after 8 years, on the seventh session of the Egyptian-Ukrainian Joint Committee on Economic, Scientific, and Technical Cooperation, which  is an obvious indicator that we are keen on boosting bilateral cooperation.”

Furthermore, Nasr noted that the Egyptian government pays special attention towards improving the country’s business climate, calling for the Ukrainian side to participate in the new cities as well as projects in the Suez Canal Corridor.

For his part, Vice Prime Minister of Ukraine Pavlo Rozenko, said that Egypt is one of the leading countries that enjoys strategic relations with Ukraine, emphasising his country’s keenness on boosting economic cooperation with Egypt.

Rozenko added that there are successful stories of Ukrainian investments in Egypt such as Naftogaz co, affirming both countries efforts to boost investment, trade, tourism, agriculture, and scientific research cooperation.

Over and above, Rozenko called on Egypt’s leadership to close their ports to ships carrying goods from Crimea (a peninsula on the northern coast of the Black Sea), Ukrainian media reported on Friday, following Rozenko’s meeting with Nasr.

“Ukraine is now undergoing difficult times because of the Russian aggression. In this difficult struggle for independence and territorial integrity, the support of the African continent, in particular, Egypt, is of utmost importance important to us. On behalf of the Ukrainian side, I appeal to the authorities of Egypt to restrict access and refrain from issuing permits for the entry into Egyptian ports of ships under the flags of third states that carry out illegal loading in Crimea,” Pavlo Rozenko stressed.