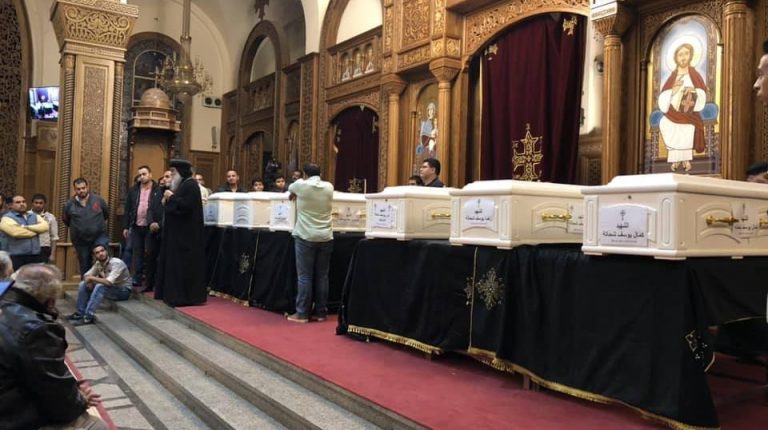 Photos and videos showing bodies soaked in blood and distorted faces of men and women emerged Friday afternoon on social media. They were taken at a desert area, near the St. Samuel Monastery in the governorate of Minya, Upper Egypt.

At least seven Egyptian Copts were killed in an attack against their buses. Over 20 people were injured, the Coptic Orthodox Church Spokesperson said in a Saturday statement on Facebook.

Noontime on Friday, unidentified gunmen opened fire at two small buses returning from a visit to the monastery, one carrying members of a family from Minya, and the other with people from the governorate of Sohag.

Gunmen opened fire on the Sohag vehicle injuring six people, but the minibus was able to escape and made its way through to a hospital. Attackers then shot seven people dead, including two women, in the second bus, according to Bishop Makarius of Minya and Abu Korkas.

In a video circulated on social media, a man is heard crying. “What a loss,” he repeatedly said. “The gunshot got you in the head, my boy.”

The Islamic State group (IS) claimed the attack, saying through its affiliated news agency ‘Amaq’ that the gunmen who attacked the monastery’s visitors were IS fighters. Egypt’s police said they were looking for the perpetrators.

The terrorist occurrence is the second to take place in the same area. On Friday 26 May 2017, IS-affiliated gunmen killed 28 Copts in an attack against their convoy as they were on their way to the monastery.

“Another St. Samuel Monastery incident. Security and police officers don’t [even] have a tent here,” a man standing next to the bodies in the same video said.

The violent act is the first in nearly a year after the mosque terror in North Sinai, the country’s largest attack which killed more than 300 men and children when gunmen besieged Al-Rawda mosque during a Friday sermon.

Al-Sisi is in the Red Sea resort city of Sharm El-Sheikh where he is sponsoring the World Youth Forum. The president sent out his condolences to the families of the victims, and stood with the forum’s attendees for a moment of silence.

Neither the Ministry of Interior nor the armed forces have issued official or mourning statements. The ministry referred to the below statement which cited an unnamed security official, calling on the press to stick to “official statements.”

The statement sent out to the press and media said the main road to the monastery has been closed for security reasons because of the unsafe desert area and absence of telecommunications network. It added that the victims had sought alternatives pathways to reach the monastery.

As for Pope Tawadros II, Pope of Alexandria and Patriarch of the See of St. Mark, he thanked Al-Sisi for a phone call offering condolences to the families of the victims, and a conversation during which the president stressed upon Egypt’s determination to stand against terrorism.

“We suffered today after this incident in which a number of our children became martyrs and wounded on their way to the [monastery]. We have suffered so much during such incidents,” the pope said in a statement early Saturday morning.

“We know that such incidents do not affect us Copts only, but affects the entire Egyptian society and we are aware that the most valuable things we have are our unity and cohesion,” the pope added.

Shortly after the May 2017 attack, the Ministry of Interior had issued a statement announcing the initial number of victims and explaining that gunmen used three four-wheel drive cars in the attack.

In August 2017, the ministry announced the killing of three terrorist suspects involved in the bus shootings during a fire exchange in a desert area near the Qena governorate.

In August, a suicide bomber failed to infiltrate the worshippers gathered at the Virgin Mary Church for a service.

Security around the church prevented him from doing so, however, and he subsequently detonated his explosives on top of a nearby bridge in the Qalyubia governorate on the outskirts of Cairo, killing himself in the process.

Police then arrested seven alleged militants with relations to the foiled bombing.

The targeting of Coptic pilgrims and worshippers in mass terror attacks has increased in the past couple of years.

Last December, a gunman killed at least 10 people at the Mar Mina Church in Helwan in the southern suburb of Cairo.

On Palm Sunday in April 2017, a twin suicide bombing took place at St. George’s Church in the northern Egyptian city of Tanta on the Nile delta, and Saint Mark’s Coptic Orthodox Cathedral, the principal church in Alexandria, seat of the Coptic papacy, where the pope was giving a sermon. The attacks killed at least 45 and injured over a hundred.

In December 2016, at least 29 people were killed and over 40 injured as a suicide bomber targeted St. peter and St. Paul’s Church, a chapel next to Saint Mark’s Coptic Orthodox Cathedral, seat of the Coptic Orthodox Pope, in Cairo‘s Abbasia district.

In North Sinai where security forces have been leading an anti-terrorism war since 2013, Coptic citizens were regularly the target of extremists, shooting them dead on the streets and in their houses, or beheading them and destroying their properties. By February 2017, dozens of families had fled the peninsula.

On Friday 31 August, Copts of Demshaw Hashem village in Minya were subjected to sectarian violence. At least two people were injured. Assaulters stole money and golden objects from them, destroyed household electronic equipment, and set fire to their properties, according to Bishop Makarius of Minya.

While the incident comes in a long series of such attacks against Coptic communities in Upper Egypt, largely in Minya, Assiut and Sohag, Bishop Makarius implied negligence on behalf of the security apparatus.

He stated that talks about a possible attack already existed few days before it happened, and security forces were informed but then arrived at the village after the attack.

He also added that another attack had taken place weeks earlier at another village called Ezbet Sultan. The motives behind sectarian attacks was more or less similar throughout the months and years; extremists objecting to Copts having a worship place to gather, whether it’s a church, an affiliated building or an unlicensed house.

In July, the Sultan village witnessed a protest with anti-Coptic chants, displaying power and defiance and an official promising them to respond to their demands at the cost of Copts rights to perform their religious rituals.

Al-Sisi vowed to protect the Coptic community in the aftermath of violence and churches burning in post-2013.

But in July 2016 as attacks mounted, the Egyptian Initiative for Personal Rights (EIPR) counted at least three incidents in the Minya governorate alone between June to July.

A report said that ten cases were documented since January 2016 and 77 cases since 2011, not including attacks on churches, religious structures, schools, civic associations, and private property owned by Copts from August 14 to 17, following the crackdown on the sit-ins of the supporters of the deposed President Morsi and pro-Muslim Brotherhood sit-ins of Rabaa Al-Adawiya and Nahda Squares.