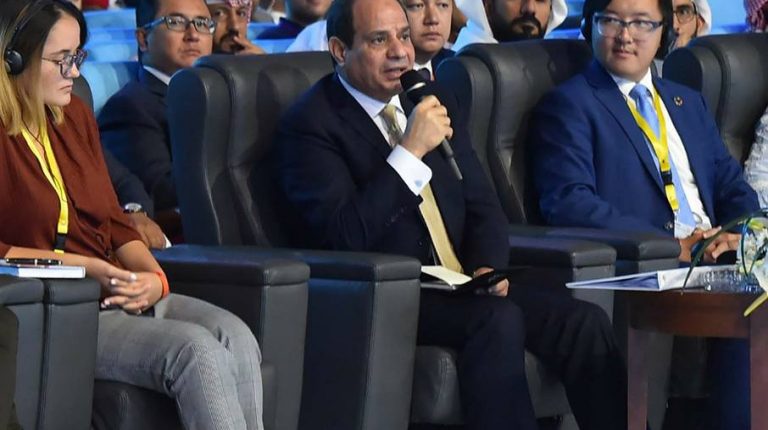 “The fall of any Egyptian hurts us, and hurts all Egyptians, and there is no discrimination between Muslims and Christians in Egypt,” President Abdel Fattah Al-Sisi said in reference to Minya’s bus terrorist attack that left 7 Copts killed and another 12 injured.

This came during the second day of 2nd World Youth Forum held in Sharm El-Sheikh which started on Saturday with the attendance of over 5,000 youths, represented by 60 delegations from all over the world.

Al-Sisi stressed the importance of dealing with citizens without any discrimination, whether based on gender or religion, as all people are equal, not only by words but through actions.

In this context, the president referred that Egypt passed a long-awaited law in 2016 easing regulations on building churches, and allowed the construction of churches with mosques in new places and even [places of worship] for other religions, for Jewish citizens, saying that “If we had other religions, we would build them houses of worship too, because the right of a citizen to worship as he wishes or not to worship, and this is a subject we do not interfere in”.

He also asserted that the renewal of the religious discourse is one of the most important demands that the region and the world needs, through finding a suitable rhetoric most convenient to the region.

Moreover, during the forum which aims to exchange expertise in various fields, Al-Sisi also addressed other trending topics including the empowerment of women and youth.

Starting with women’s empowerment, the president noted that Egypt is enthusiastic about giving women their rights and positions in society, explaining that it was clearly seen through several events and decisions. He pointed out that there is a large presence for women in the Egyptian government and in leading positions in general, adding that the opportunity is still available to increase their numbers.

Egypt is planning to provide the necessary funding to enable women to work and invest, he said, adding that in Egypt there are special programmes providing care and services for women, still not enough but significant.

As for youth empowerment, the president highlighted that the idea of youth conferences was inspired by the young people themselves, in order to open a dialogue with the leadership, especially considering the negative impacts of social networking, so this was one solution to listen to each other and overcome the problems.

“Through logical dialogue with the young people we will make them respond and endure with us,” Al-Sisi concluded.