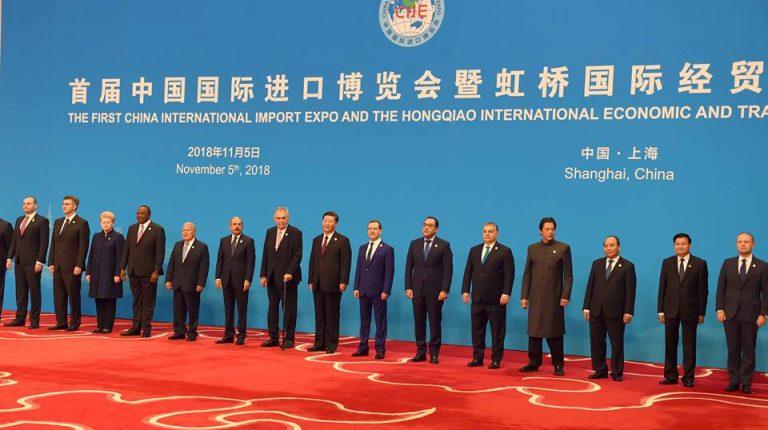 Shanghai- Egypt’s participation in the first China International Import Expo in Shanghai reflects trust in the opportunities offered by the exhibition to enhance cooperation between Egypt and China, Prime Minister Moustafa Madbouly said on Monday.

During his speech at the opening ceremony of the exhibition, Madbouly said that Egypt is enthusiastic towards boosting cooperation between the two countries on bilateral and regional levels in various fields. He added that Egypt’s participation also comes as an appreciation of the Chinese intensive efforts to enhance fair trade among both countries.

The prime minister pointed out that the Egyptian-Chinese relations have seen significant progress in the last four years. The bilateral relations developed significantly, especially after signing the inclusive strategic partnership deal during President Abdel Fattah Al-Sisi’s visit to China in December 2014.

On the regional level, Egypt was one of the first countries to join the Belt and Road Initiative announced by Chinese President Xi Jinping in 2013, in order to link the continents of Asia, Europe, and Africa.

The Minister of trade and Industry, Amr Nassar, said that Egypt seeks to further reinforce its strategic partnership with China, not only commercially, but also in the investment sector. Given its unique location, Egypt can be focal point for Chinese products in the promising African market.

Nassar added that China ranked 21st among investor countries in Egypt since 2014, with a noticeable climb in the volume of Chinese investments in Egypt, especially after signing an agreement to increase trade volume between the two countries during Al-Sisi’s second visit to Beijing in 2015.

He pointed out that Egypt’s participation in the Shanghai exhibition can enhance the growth of Egyptian exports to the Chinese market. It also gives Egypt the chance discover major important trade and investment opportunities, as well as possible ways to improve the investment environment in Egypt.

President Xi Jinping said on Monday that China will capitalise on the important role of Shanghai and the surrounding areas in opening up for foreign markets.

Xi Jinping’s remarks came during his opening speech in the first session of the Shanghai exhibition.

“Openness, innovation, and inclusiveness have become the hallmark of Shanghai, and they are also a vivid reflection of China’s development and progress in the new era,” Xi Jinping said.