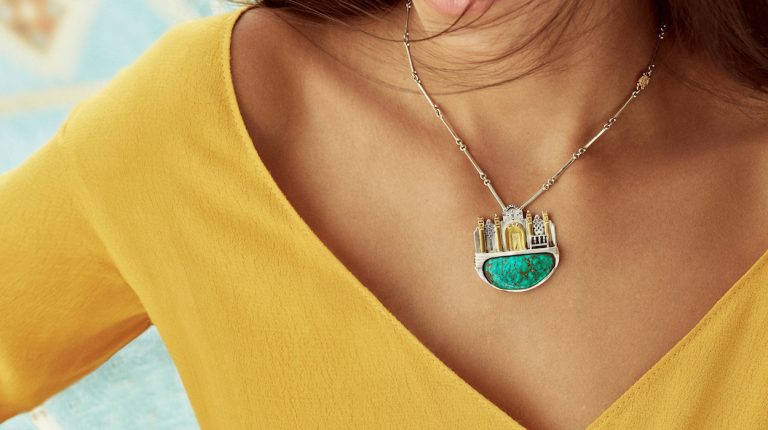 Stories are often told eloquently with the most non-verbal methods. Jewellery, like many other forms of art, is a tool for both expression and documentation. With a strong bridge between jewellery and architecture, she has taken many trips across the two-way route, over the duration of 50 glorious years. Her designs are often given from one generation to the next, due to its vivid representation of the world, as well as its intricacy.

Azza Fahmy, a true local pride and design aficionado, has just taken a creative trip to the enigmatic Nubia. Through utilising her eye for luxury and details, the designer turned the touristic destination into a stunning eight-piece hand-crafted collection, which could be described as a true ambassador.

Inspired by the colourful architecture of Nubian houses, as well as Hassan Fathy’s old Nubia’s extensive photographic archives, this fabulous collection depicts miniature sculptural renderings which capture the smallest details seen in Nubia’s domes and artistic motifs. The wearable city is encrusted with champagne diamonds and semi-precious stones, including Turquoise and Aquamarine. “This collection holds a very personal resonance, as the theme is reminiscent of ‘Houses of the Nile’, my very first collection, which launched my design career.  For ‘Nubia’, I was creatively drawn to the structure and characteristics of Nubian houses and those of the city. The collection artistically depicts authentic architectural details, and also includes a representation of lake Nasser, through the use of a statement irregular Turquoise stone.  It is great to be able to celebrate the city through our jewellery,” said Fahmy, with a passionate twinkle in her eyes.

Consisting of rings, earrings and necklaces, this contemporary artistic collection reveals Fahmy’s personal connection to this historical city in the south of Egypt, and echoes her successful design approach of translating cultural and historic international references to contemporary jewellery.

“I have always carried Egyptian and Sudanese blood in my veins. My father was born to an Egyptian man and a Sudanese women.” Fahmy added with a nostalgic smile “I have always remembered my grandmother as an angel, something that might explain my powerful longing for the south.”

According to the designer, Hassan Fathy, the renowned architect was in fact the first to introduce her to the exotic region during her years at university. His passion for traditional Nubian architecture and his elaborate theories on how it could be utilised in modern cosmopolitan architecture ignited Fahmy’s interest. For years after, she would still remember his analyses of local traditions, colours and domes that decorate each corner.

“Nubia is full of women, who are true artists, creatives, and advocates of beauty. I have always loved the sketches, hand painted with precision on the majority of houses. The primary flock of ducks walking through vast greenery, as well as alligators, geometric motifs and lions among others,” elaborated Fahmy regarding what captures her interest in the exceptional city.

Nevertheless, it was not until the designer came across a collection of turquoise stones during a trip to India, that she decided to turn her favourite destination into a jewellery statement. Sourced from the Tibet, the big stones capture the essence of Lake Nasser while simultaneously using gold and silver to capture the Nubian city.