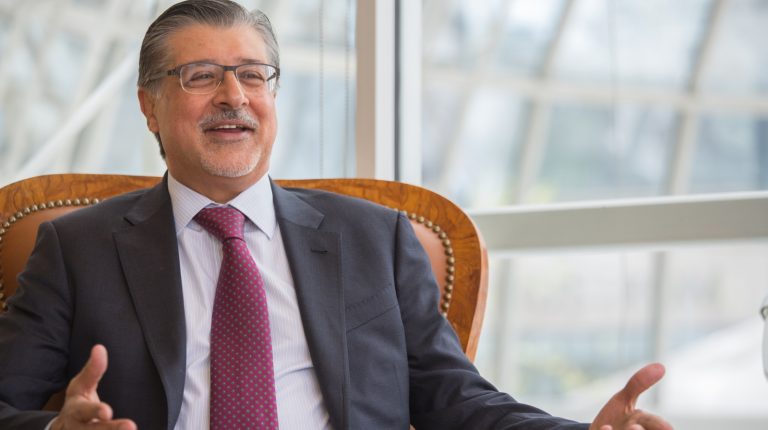 Adnan Amen’s visit, the director general of the International Renewable Energy Agency (IRENA), to Egypt, shows that Cairo is still attractive for investments and has many promising opportunities to achieve a breakthrough in electricity and new and renewable energy production.

Daily News Egypt interviewed Adnan Amen in order to talk about his view of the investment climate in Egypt, and the way he sees new and renewable energy projects currently implemented, as well as the requirements needed during the upcoming period in order to expand projects.

He believes that the MENA region has been taking slow steps in the field of renewable energy, however, the developments were quick. Egypt is one of the quickest countries to develop in the region at the present time, the transcript for which is below, lightly edited for clarity:

How do you assess new and renewable energy projects in Egypt?

Egypt is a very promising market for investments thanks to the political leadership which has adopted an ambitious plan for electricity production from renewable sources, and reduced the reliance on traditional fuel in production plan— a trend that many countries have adopted in order to achieve sustainability.

Is Egypt successful in the new and renewable energy sector?

Egypt enjoys abundant sunshine in many areas and has substantial potential, which enables it to reduce the cost of producing electricity, and providing millions of dollars with its ability to take energy production to 53% of the total electricity produced from renewable energy sources by 2035. The Egyptian government is working hard to meet the growing demand on electricity, as the total installed capacity from renewable sources is estimated to be 3,900MW of wind, solar and hydropower energy up until now.

What measures does Egypt need to take to become a regional energy centre?

Egypt’s potential of renewable energies is enormous, and the government is moving quickly towards accelerating its utilisation. Based on the achievements already made, Egypt would have a chance to increase its ambitions and become a regional centre for energy as well as increase investments.

What are the latest developments of the ‘Clean Energy Centre in Africa’?

I discussed with President Al Sisi the ‘Clean Energy Centre in Africa’, and the results of this trend are deemed huge, and can serve as one of the central concepts of Africa’s economic transformation towards the future, relying on clean energy, whether solar, wind or earth-core energy.

Right now, the world is seeing great and rapid changes in the field of electricity and energy. This change will have a great impact on the production, distribution and trade of electricity in the future.

Currently, we are looking at the geopolitical changes in terms of pipelines, oil shipping and related strategic issues. In the future, the focus will be more on generating, producing and distributing energy, through the border via clean corridors, all of which would have a positive impact on all the cooperating companies, with Egypt being the most prominent.

How do you see the reduction in the prices of components and costs of renewable energy?

The significant decline in renewable energy costs in recent years has encouraged governments around the world to reconsider energy strategies so as to better reflect the new economics of renewable energies.

The main reason for the low costs is due to the huge development of the technology used to manufacture solar cells and wind turbines.

Why was IRENA established?

IRENA was established in 2009 by 75 countries, with 170 member countries. It is an intergovernmental organisation to encourage the reliance on renewable energy worldwide. IRENA aims to support countries in their transformation to a sustainable future for energy, as well as a main platform for international cooperation and a centre for policies, technology, financial resources, and knowledge in the field of renewable energy. It provides a group of services, including annual reviews of renewable energy employment, statistics, cost studies, and readiness assessments conducted in partnership with governments and regional organisations to help promote renewable energy development which is country-specific.

What is your vision of the renewable energy sector?

We seek to achieve sustainable development and reach energy security as well as low-carbon economic growth, in addition to facilitating the exchange of knowledge and technology transfer in order to provide clean and sustainable energy. IRENA aims to be the main driving force in promoting the rapid transition and sustainable use of renewable energy on a global scale.