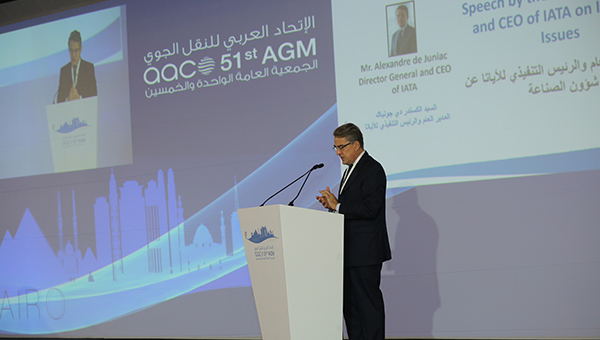 Alexandre de Juniac, CEO and director general of the International Air Transport Association (IATA), said that a key tool in keeping flying safe is the IATA Operational Safety Audit (IOSA), adding, “Egypt led the way in doing this, and it has been a strong supporter in our renewed efforts to get governments in the Middle East and North Africa region (MENA) to fully utilise the IOSA’s potential.”

Bahrain is the latest MENA state to incorporate the IOSA into their regulations, said de Juniac during his speech at the Arab Air Carriers’ Organization annual general meeting on Tuesday, which was held in Cairo, noting that the region has a strong safety record.

“Safety on the ground is as important as safety in the air. I would also like to recognise the leadership of Emirates Airline and Qatar Airways in pioneering adoption of the IATA Ground Operations Manual (IGOM),” said de Juniac.

Moreover, de Juniac called on MENA countries to maximise the economic and social benefits of aviation, noting, “aviation currently supports 2.4m jobs and $130bn in economic activity across the MENA region, which represents 3.3% of all employment and 4.4% of all GDP in the region.”

“Over the next 20 years we expect passenger numbers to grow by 4.3% annually. As aviation leaders we must work together and with governments to realise this potential,” concluded de Juniac.