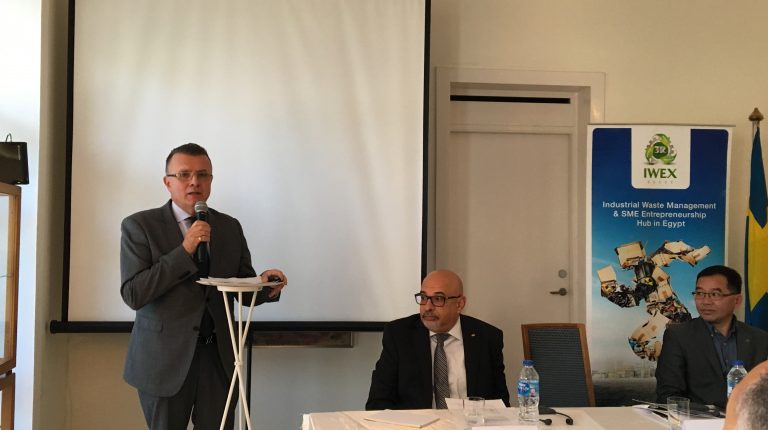 The Swedish embassy in Cairo organised a high-level expert panel early this week to share experiences from Sweden and Egypt on the topic of waste management and energy. The event was held in cooperation with the Egypt National Cleaner Production Centre, while the panellists’ list included experts from academia, government, multinational enterprises and start-ups.

“In order to solve the challenges of our time, we need to bring together different stakeholders with matching skills and visions,” said the ambassador of Sweden to Egypt, Jan Thesleff.

“Sweden is proud of the triple helix model, a collaborative method through which academia, government, and the private sector work together to create synergies, to solve various societal challenges, including innovative solutions to waste and energy,” added the ambassador.

The treated amount of household waste amounted to 4.783m tonnes in 2017, which is a 2.5% increase compared with 2016, according to Avfall Sverige which is the Swedish Waste Management recycling association.

In 2015, Sweden imported 2.3m tonnes of waste from, among others, Norway, the UK and Ireland, mentioning that Sweden has been burning waste for a long time, as the first incineration plant was set up in 1904, while today there are 32 plants, indicated Avfall Sverige.

Heavy metal emissions have been reduced by 99% since 1985, even though Sweden incinerates three times more waste now, mentioned Avfall Sverige.

Moreover, Egypt and Sweden are facing similar challenges which is why both sides have experiences to share, said the ambassador during his speech at this week’s event, asserting his country’s goal to create a platform to further the dialogue around such an important issue that favours a more sustainable environment, and economic development.

“Egypt and Sweden are both fully committed to the SDGs and Agenda 2030,” noted the ambassador.

Ahmed Gaber, professor of Chemical Engineering at the Cairo University and chairman of Chemonus Egypt Consulting, participated in the event with Yasser Sherif, managing director of Environics, along with representatives from Cairo University, Ain Shams University, KTH Royal Institute of Technology in Stockholm, and representatives of the Swedish companies ABB, IKEA, Boson Energy and Sweco Environmental.

The embassy’s event was held on the eve of the Second International Conference on New Trends in Sustainable Energy, hosted by Pharos University in Alexandria, in collaboration with Sweden’s KTH Royal Institute of Technology, which began on Monday, and is scheduled to be concluded on Wednesday.

The two universities have a long-term partnership which brings Swedish quality engineering and science education to Egypt, and is a solid platform for academic exchange. Each year several dozen post-graduate students are enrolled at the KTH Royal Institute of Technology.