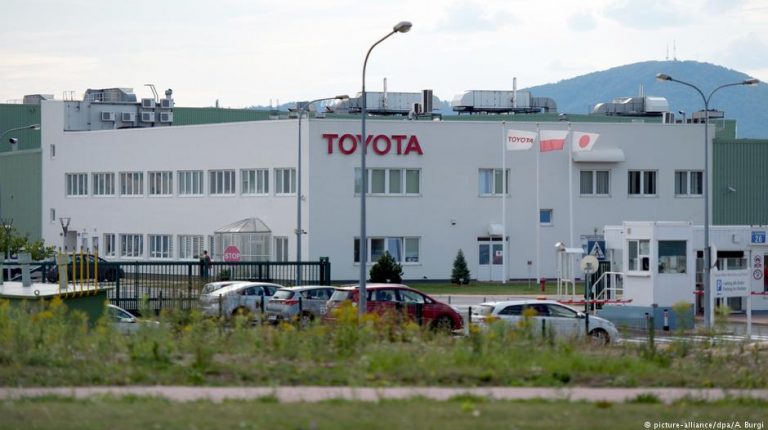 Toyota has picked the region of Silesia in southern Poland as the site for a new car factory. As Europe turns its back on diesel cars, the rush is on for electric and hybrid cars and Poland wants to be in on the action.Toyota has started production of hybrid electric transaxles at its Walbrzych plant in the southwest of Poland. The launch of the production line a few days ago means the Japanese car giant for the first time manufactures this key component, used to link electric motors and combustion engines, outside Asia, and it's a new step for both the Japanese auto giant and the eastern European country.

Production at Walbrzych comes as Toyota introduces its advanced hybrid technology and the Toyota New Global Architecture to its Polish manufacturing facilities. The new assembly line is part of an investment of over 4.5-billion zloty (€1.1 billion, $ 1.4 billion).

Toyota said it aimed to keep production close to its sales markets in Europe. The transaxle will be fitted to the new Corolla Hybrid, built at Toyota's Burnaston factory in the UK, and the C-HR Hybrid, made in Turkey.

"In 2000, with the premiere of the first hybrid model, we have paved the way to electrification of cars in Europe," Johan van Zyl, president of Toyota Motor Europe, told Business Insider Polska. Almost every second car leaving Toyota showrooms was already a hybrid car, van Zyl added.

Toyota's operations in Poland started in 2002 with the production of gearboxes for the Yaris model in Walbrzych, mainly for customers from Turkey and the UK.

In 2017, Toyota's two Polish factories, Walbrzych and Jelcz-Laskowice, merged and since then Toyota has been able to service its car assembly plants in the Czech Republic, the UK, France, Turkey, Russia, South Africa and Japan with parts produced at its Polish facilities.

Toyota is seeing a significant increase in sales of its hybrid gasoline-electric vehicles in Europe. The share of hybrid vehicles among its total sales in October reached 45 percent, double the levels before Volkswagen's (VW's) "Dieselgate" scandal.

Growth at the Japanese manufacturer has been driven by hybrids — led by the C-HR compact SUV and the RAV4 SUV — and it's targeting European sales of more than 1 million vehicles.

The market for diesel-powered cars has weakened in the wake of VW's emissions-cheating scandal and tougher pollution regulations introduced by the European Union.

By 2021, the fleet CO2 average emissions for automakers in Europe must drop to 95 grams per kilometer (g/km) from 118.1g/km today and companies that don't reach the target will be hit with fines. In 2016, Toyota's fleet average was 105.4g/km.

Read more: The death of diesel? What the German court verdict could mean

"The more hybrids we sell, the better our chances" of reaching the target, Toyota Europe Chairman Didier Leroy said.

Polish automotive plants are no longer purely assembly plants, playing a role in the development of new technologies.

A Warsaw-based think tank, Exact Systems, expects Poland to catch up with the most advanced automotive markets within five years, although this may be a tad too optimistic.

But Polish manufacturing is making its mark in the electric bus market with companies such as Solaris, Ursus and Solbus. China's biggest producer of electric-vehicle batteries, LG Chem, has already built its largest European manufacturing site in Poland.

Today, electric vehicles (EVs) account for just a small fraction of car sales in Poland — 1,068 new ones were registered last year, up from 569 in 2016 and out of 216,566 in the EU as a whole, according to the European Automobile Manufacturers' Association.

"We are extremely pleased that Toyota has decided to start production of a key hybrid drive component in Poland," Jan Wisniewski from the Polish Association of Alternative Fuels, PSPA, told DW.

Other EV projects by foreign manufacturers include a factory in Wrzesnia, where German carmaker Volkswagen will build its electric e-Crafter model, and truck maker MAN its eTGE fully-electric van. In the region of Wroclaw, premium automaker Daimler is preparing to start a factory that will produce engines for, among others, Mercedes plug-in hybrids.

US auto group Fiat Chrysler (FCA) is also reportedly considering starting production of a zero-emission version of Fiat 500 in the Polish town of Tychy.

"The potential of Poland in the field of electromobility is very large and we hope that in the near future we will become one of the European leaders in this sector," Wisniewski said.

Poland's Electromobility Development Plan, adopted by the government of prime minister Mateusz Morawiecki in 2017, plans for one million electric cars on the road by 2025. The Prime Minister said that electric cars are to account for 10 percent of cars in the public administration by 2020, rising later to 50 percent.

To support the increase in electric cars, the government wants to build 6,000 charging stations by the end of 2020, plus 400 fast-charging stations. Warsaw wants to make electric mobility an "integral part of Poland's economic development, combining scientific research, entrepreneurship and state support."

Already home to electric bus manufacturing plants and a big EV battery plant, Poland is aiming to become the motor for electrifying transport in Europe. "We are really pioneers," said Marta Gajecka, head of energy advisers to the President of the Republic of Poland.

"Electrifying transport has the potential to enable cheaper and more reliable access to mobility. Electromobility forms a central component of the EU's ambition to decarbonize its economy in line with the Paris Agreement," she recently told the European energy industry weekly, The Energy Post.

An increase in EVs in Poland is urgently needed to improve air quality, especially in the capital Warsaw, where road transport is the main source of air pollution. Poland is also almost entirely dependent on imported oil, most of which comes from Russia (76 percent in 2017, down from 96 percent in 2012), to meet transport demand. A shift to more electric vehicles on its roads would help lower that burden.

The emergence of a new industry in Poland could also have a wider economic impact. According to a report by Cambridge Econometrics and the Warsaw-based Electric Vehicles Promotion Foundation, the electrification of transport in Poland could create 50,800 jobs and boost the economy by 0.3 percent by 2030.