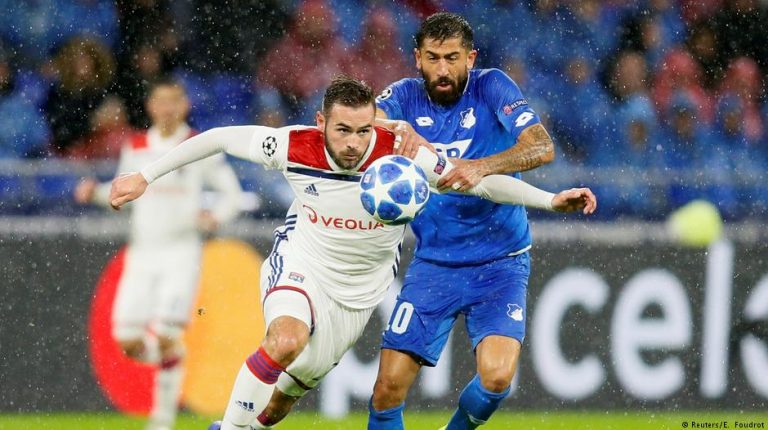 It was another flawed performance by Julian Nagelsmann’s side, but this time they rewarded themselves with a point rather than dropping two. Making the knockouts though, looks a long shot.Lyon 2-2 Hoffenheim
(Fekir 20', Ndombele 28' – Kramaric 65', Kaderabek 90+2')

Hoffenheim have had their moments in Europe this season, and in Lyon they came better late than never as a last-minute equalizer in the pouring rain salvaged their slim hopes of making the knockouts.

Despite pressing early on, Hoffenheim found themselves a goal behind when Nabil Fekir poked home in from a goalmouth scramble that began after Tanguy Ndombele's shot from the edge of the box hammered off the post.

Anthony Lopes made a brilliant save to deny Ishak Belfodil in the six-yard box and then suddenly Hoffenheim found themselves two goals down when an unmarked Ndombele scored inside the box thanks to a hefty deflection.

Kerim Demribay tried to get the visitors back in it, but Lopes made another strong save to keep out his long-range effort.

Things got worse for the Bundesliga side in the second half as Kasim Adams picked up his second yellow and was sent off, leaving Lyon plenty of space to score more. Fekir came closest, but was denied by Oliver Baumann.

Hoffenheim were sparked into life when Andrej Kramaric's mazy run ended with a low drive into the bottom corner, although the goal shouldn't have stood as the ball was out of play earlier in the move.

With time running out, Joelinton flicked on a deep free-kick and Pavel Kaderabek was on hand to convert at the back post with Lyon appealing for offside.

The result leaves Hoffenheim in third in Group F with three points, three behind Lyon with two games to play.