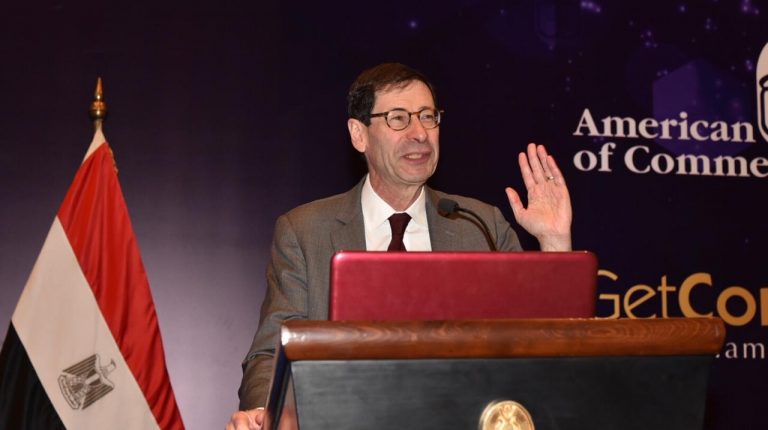 Maurice Obstfeld, the IMF’s chief economist, said that Egyptian authorities are required to double their efforts to keep the positive economic outlook, noting, “Egypt’s growth is doing better, but again there is a need for structural reforms,”

Obstfeld remarked during his speech in the event which was organized by AmCham Egypt on Thursday, that since the beginning of the fund programme in Egypt, the negative outlook shrank  to zero, employment rates are declining, GDP is rising to over 5%, and international reserves are healthy, adding that inflation rates and macroeconomic indicators are showing robust signs.

“Egypt’s debts levels are more than 90% of the GDP, which is still dangerous in the current environment, as interest rates are on the rise,” said Obstfeld, affirming the importance of Egyptian authorities to implement the structural reforms and absorb youth into new industries.

Egypt’s future efforts, in terms of structural reforms, will inspire growth and investments, added Obstfeld, noting that Egypt’s economic growth is higher than the growth average of oil importers in the Middle East and North Africa and Pakistan (MENAP) region.

“There is an instant need for structural reforms in this area, particularly after the global trade issues,” noted Obstfeld.

Moreover, Obstfeld said that Egypt’s economy witnessed a very impressive declining inflation since the middle of 2017, when it reached less than 30% to the current figures now, adding, “One of the main objectives of Egypt’s economic programme is to get the inflation rates down to single digits.”

Generally, there is fear that energy prices’ will increase, and will lead prices and core consumer price index (CPI) to also rise in advanced economies, said Obstfeld.

Meanwhile, Obstfeld added that global growth is projected at 3.7% for 2018 and 2019, which is 0.2% point lower for both years than the past forecast in April 2018, adding that the trade tariffs conflict of China and the US affected the growth forecast.

Since January, a sequence of US tariff actions on solar panels, washing machines, steel, aluminium, and a range of Chinese products, plus retaliation by trading partners has complicated global trade relations, said the IMF’s World Economic Outlook (WEO) report in October.

“For the MENAP region, generally, we see that our economic performance and growth projections are improving somehow, only dramatically outperformed by the Gulf Cooperation Council (GCC) in 2017,” said Obstfeld.

For his part, Reza Bakir, senior resident representative of the IMF in Egypt, said that IMF has inaugurated its office in Egypt one year ago, adding, “since then AmCham Egypt has been a good friend, we are happy today that we have made available to you our senior officials such as Dr. Obstfeld to reveal the WEO as well as the regional outlook including Egypt.”

Bakir noted that Egypt’s economic development has two pillars, which are the macroeconomic stabilisation and the structural reforms, mentioning that the Egyptian markets need at least 700,000 jobs opportunities, which require many reform measures, including easier procedures for getting industrial lands for example.

Additionally, Executive Vice President of AmCham Egypt, Ahmed Abou Ali, said that Egypt is continuing its successful programme with the IMF, adding that the budget deficit is narrowing, GDP growth is improving, tourism is recovering, and natural gas production is increasing.

Moreover, Sylvia Menassa, CEO of the Amcham Egypt, said that AmCham hosted a major US business mission to Egypt, in coordination with US Chamber Of Commerce and the US Egypt Business Councils in October.

“We hosted more than 110 leading business figures representing 45 US companies,” added Menassa, noting that the past business mission expressed their optimism of the country’s future.

Past business missions had a very encouraging meeting with President Abdel Fattah Al-Sisi. They included several numbers of high-level panel discussions which were held, adding, “these events were attended by about 2,500 officials and senior business community representatives.”

Menassa said that AmCham Egypt will organise a visit of American social media influencers and bloggers to Egypt on November 12, where the delegation will receive a comprehensive tour to Cairo, Luxor and El-Gouna for the first time.

The aim of the visit is to change Egypt’s perception abroad, added Menassa, affirming the close cooperation with Egypt’s Ministry of Tourism in organising the visit.