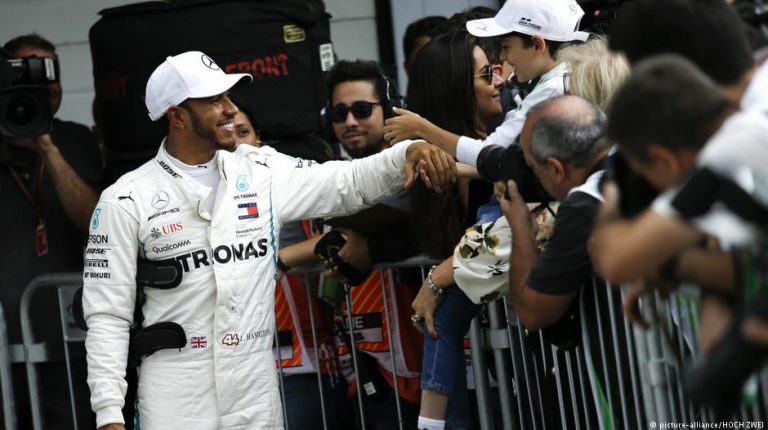 Lewis Hamilton only narrowly edged out Sebastian Vettel in an extremely tight qualifying session in the Brazil. Less than two tenths of a second separated the front four.Mercedes and Ferrari seem very evenly matched going into Sunday's Brazilian Grand Prix. Just 0.175 seconds separated Lewis Hamilton on pole position and Kimi Raikkonen in fourth during qualifying at the Interlagos circuit in Sao Paolo.

Vettel, however, almost faced a penalty for race day. During the second session of qualifying, at a tense time due to changeable weather, Vettel was called for a routine weighing inspection at the weighbridge in the paddock.

The German was displeased by the timing of this random procedure, fearing it might jeopardize his chances of making the decisive top 10 shootout for pole. As a result, he did not switch off his engine, as required, and then drove off the weighbridge under his own power, again in breach of the rules.

FIA technical delegate Jo Bauer referred the matter to the stewards for review, justifying the decision by saying that weighing a car with a running engine "makes it difficult to get a stable result," and that by driving off the scales rather than being pushed, Vettel "destroyed the scales."

Ultimately the stewards settled for issuing Vettel with a reprimand and a fine of €25,000; he can keep his front row grid slot.

Hamilton, too, was involved in controversy after the session for impeding Williams driver Sergei Sirotkin during his flying lap. He escaped sanction.

Daniel Ricciardo was actually sixth fastest, but it was already clear that he would take a five-place grid penalty for taking replacement parts.

As to the very front of the grid, it might not be clear who's starting from the front until Sunday morning.