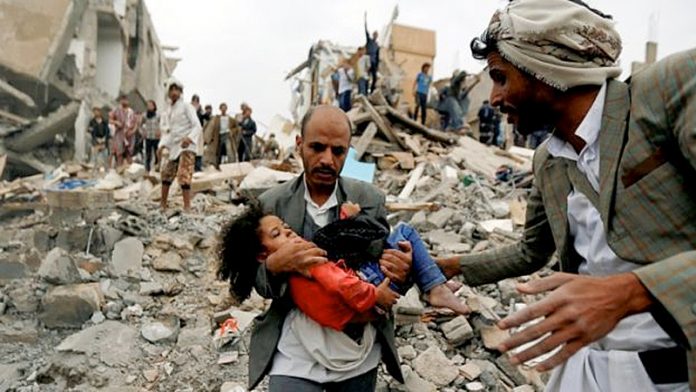 The US will stop aerial refuelling of the Saudi-led coalition’s aircrafts which participate in airstrikes in the Yemeni war, according to Reuters quoting two US officials. The sources, who spoke on condition of anonymity, said that Saudi Arabia can now to refuel its aircrafts.

Soon following the leaks of US intention on Friday night, the Saudi-led coalition announced that it has requested Washington to stop refuelling the coalition’s aircrafts engaged in Yemen’s war as Saudi Arabia can now handle the process itself.

“The Kingdom of Saudi Arabia, and the member countries of the Coalition to Support Legitimacy in Yemen, continually pursue improvements to military professionalism and self-sufficiency,” Saudi Arabia said in a statement released by the kingdom’s official news agency.

The US was refuelling about 20% of Saudi aircrafts that participate in the Saudi-led military operations in Yemen.

In March 2015, Saudi Arabia announced the formation of a military coalition against the Iran-backed Ansar Allah ‘Houthi’ group after it took over the Yemeni capital of Sanaa in September 2014.

Besides Saudi Arabia, the coalition includes the UAE, Jordan, Bahrain, Pakistan, Djibouti, Sudan, Senegal, Kuwait, Morocco, Malaysia, and Egypt, as well as the internationally recognised government of Yemen. Qatar was part of the coalition until the Gulf crisis erupted in May 2017.

Also, on Friday, Norway announced the suspension of new arms licenses’ exports to Saudi Arabia. Norway’s foreign ministry explained in a statement, “We have decided that in the present situation we will not give new licenses for the export of defence material or multipurpose goods for military use to Saudi Arabia.”

The Norwegian move came amid international outrage aroused following the murder of prominent Saudi journalist Jamal Khashoggi inside his country’s consulate in Istanbul, Turkey, on 2 October. Saudi Arabia also faces criticism over its engagement in military attacks on Yemen which contributed to one of the world’s worst humanitarian crises.

Meanwhile, the Yemeni armed forces affiliated with the internationally recognised President Abdrabbu Mansour Hadi announced on Friday the launch of a vast military campaign to restore control over Al-Hudaydah city and port in west Yemen.

The conflict in Yemen resulted in the death of more than 100,000 civilians and wounding of hundreds of thousands.

The UN warned in early October that about 13 million people in Yemen could face starvation amid the continuity of war in the country, without allowing humanitarian aid. The UN described the situation in Yemen as “the worst famine in the world in 100 years”.