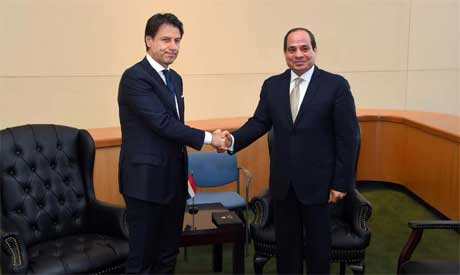 Egypt’s President Abdel Fattah Al-Sisi received a phone call from Italian Prime Minister Giuseppe Conte on Saturday in which they discussed the Libyan crisis, the presidential spokesperson Bassam Rady said in a statement on Sunday.

It comes ahead of the Palermo Conference hosted by Italy on 12-13 November. It will bring together key Libyan political factions and international partners to draft a plan to deal with the political crisis plaguing the country since 2014.

Al-Sisi asserted that Egypt supports the efforts that aim to reach a political resolution to the Libyan issue, stressing Egypt’s position of adhering to the unity of Libyan lands and strengthening its national institutions, which will contribute to the return of stability and security in the Middle East. The leaders further exchanged viewpoints on several regional issues of common interest.

The Palermo Conference is an attempt to limit the French intervention in Libya, that started to increase after the Paris Summit in May and which Italy did not attend.