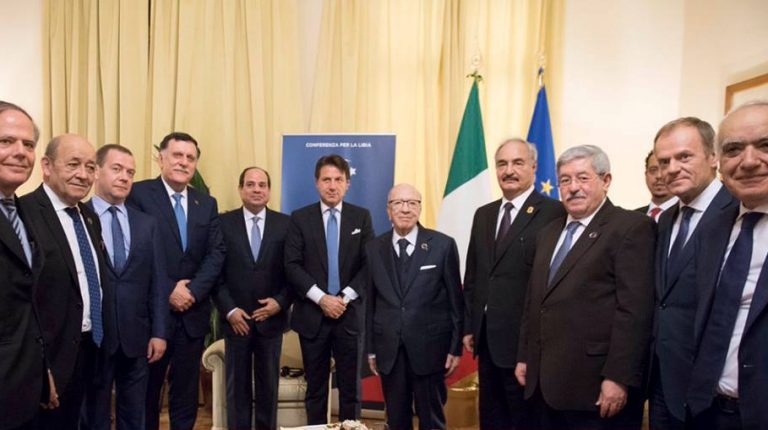 President Abdel Fattah Al-Sisi met with the leader of the Libyan national army Khalifa Haftar, during the mini-summit on security in the attendance of the Prime Minister of Libya Fayez al-Sarraj and Italian Prime Minister Giuseppe Conte during the Palermo conference.

The Palermo conference is attended by key political Libyan factions and other international partners in order to draft a plan to deal with the political crisis in Libya.

Prior to this, Al-Sisi met with Conte, in which he affirmed Egypt’s position to reach a comprehensive political settlement in Libya with the support of the United Nations that should be based on the implementation of the 2015 Shkirat Libyan political agreement, and in a manner that preserves the unity and territorial integrity of Libya, to help restore the role of the national institutions of the state.

The meeting focused on reviewing the latest developments in the Libyan file, where the Italian prime minister expressed his country’s appreciation for the active role played by Egypt to restore stability and security in Libya, also for Al-Sisi’s participating in the mini-summit.

Conte further pointed out that Egypt represents a cornerstone of security and stability in the Middle East.

In a similar vein, the Italian official expressed his country’s enthusiasm to strengthen bilateral cooperation with Egypt, particularly in view of the positive developments in the economic sector and the implementation of progressive major projects.

Meanwhile, Al-Sisi pointed out the positive developments in the relations between the two countries during the recent period, asserting Egypt’s keenness to develop aspects of bilateral cooperation in various fields, as well as coordination with Italy on regional issues of common interest.

Moreover, the two sides discussed the latest developments regarding the investigations into the death of the Italian student Giulio Regeni, and the joint cooperation between the two sides to uncover the circumstances of the case in order to find the perpetrators and bring them to justice.

Al-Sisi arrived in Italy on Monday to attend a summit on the Libyan crisis in Palermo, after an invitation by Italian Prime Minister Giuseppe Conte during a phone call.