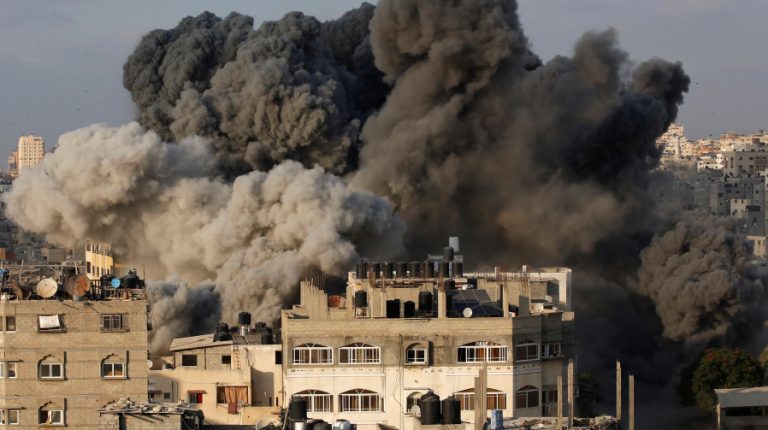 The Israeli army continued on Tuesday its attack against the besieged Gaza Strip, as the Palestinian resistance movement launched over 400 rockets towards Israeli northern towns. The updates in Gaza came after an Israeli attempt to conduct a military operation inside the strip on Sunday.

The escalation resulted in the death of seven Palestinians including one of Hamas’s military commanders, while one Israeli soldier commander was also killed.

According to Israeli statements, the operations of Hamas and Al-Jihad Al-Islami resulted in launching 400 rockets and wounding 19 Israeli citizens, while the Iron Dome system intercepted about 100 Palestinian rockets. Israel said that its army aimed at 70 targets in Gaza across the Strip, including an attack tunnel and four military compounds in Gaza City, Beit Hanun, Jabaliya, and Khan Yunis, as well as a Hamas launch site in Khan Yunis.

The Israeli assault, which is considered the hardest since 2014, resulted in destroying the Al-Aqsa TV channel headquarters, which is affiliated to the Hamas movement that is ruling the Gaza Strip.

Abu Obeida, the spokesperson of Hamas, warned on Tuesday that the movement would expand the rocket range to include the cities of Beersheba and Ashkelon, if Israel continued to shoot against the Strip.

According to the Jerusalem Post, Israel suspended contacts with Egypt and the United Nations, to broker a ceasefire in Gaza. The Israeli security cabinet met on Tuesday to decide on Israel’s response to the escalation.